from rain to art 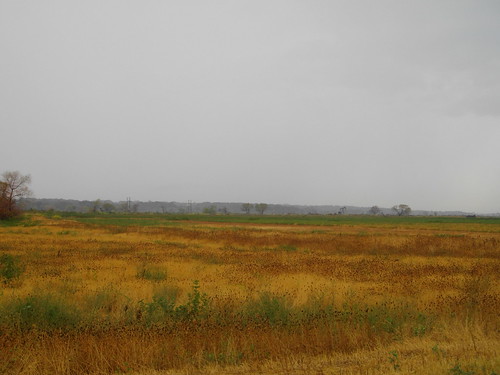 August in north Texas amounts to waiting for the heat to break. Thursday the heat broke, with the high reaching only the warm but workable 97 degrees Fahrenheit. Today at 5 a.m. the rain began. Rain in our drought-parched region is like manna. The rain stayed into the afternoon, and then left cooler temperatures and cloud cover.I drove through the rain to Hagerman National Wildlife Reserve, about an hour north of us. This reserve, on the marshes just south of Lake Texoma, always offers interesting wildlife. Today I walked by Deaver Lake to a place in which herons and egrets were having a convention in shallow water. Six dozen or more stood together, conducting a straw poll over whether the country needs more ponds or fewer people. As I walked up to them, I tried to stay quiet and photography-inclined. None of my pictures came out very well. In addition, many of them took to the air upon my approach, creating a sky of white winged tall birds. As I took a simple video of their flight, I saw that one as a roseate spoonbill. We do not see them that often here. The roseate spoonbill landed, and I got a great view of its fishing habits, using its spoon bill in the water with an impressive flourish. A ranger in a pick-up truck was driving down the old rail-trail hiking trail. Presumably his status gave him a dispensation to use motorized transport.He told me that a wood stork had been seen this Summer. Wood storks are rare indeed here, usually seen, the park literature said, every 3 to 5 years. I did not see a wood stork. But I did see lots of lovely late Summer foliage, and great blue herons, great egrets and cattle egrets in profusion.I asked the ranger if one could fish the little Deaver Pond. He said that I could, but there were only mud cats. I told him that much of my boyhood was spent catching chucklehead catfish (the local name for bullhead catfish)from a pond.
I allowed as how I heard that some folks in Minnesota considered them a delicacy, but the ranger astutely pointed out that those catfish grow up in spring-fed Minnesota lakes.

I went to the new visitor center, which is lovely though a work in progress. The friends of Hagerman were having a great program at 10 about a pioneer naturalist, but I decided to hit the road. I stopped by Gander Mountain sporting goods store for some fishing items. I also saw some Teva hiking shoes on sale, so I bought them. I stopped at the Whichwich sandwich chain, where I had a turkey with mozzarella, lettuce and sauerkraut, chips and a drink.

I came home and created a song on my synthesizer. I first recorded a sample from my turtle ocarina, and then put it in a software synthesizer and wrote a melody. The song pronounced itself done at 2 despite my efforts to alter its simplicity through various software gizmo effects. Lately my music tells me to be simple and melodic, and I am not gifted enough to contradict it.

I had some good news today. A cool website called Lovelorn Poets made me the "Saturday feature" based on my visual art. Here is the:

The site is a fun read, which does a creative take on the "missed connection" theme.