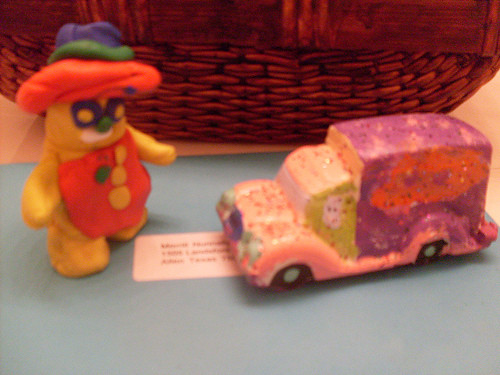 Joe Tom and his van, originally uploaded by gurdonark.

We dined on pho and salad rolls for lunch. We stopped by a Staples to get a specialized battery, but it turnd out I had to get one later from Radio Shack. I created a three second stop-motion animation of a van rolling on a counter-top, using my little 25 dollar Sunplus camera. It took 18 photos to make a 3 second segment. The animation was pretty primitive, and the images looked best in sepia due to the camera. Still, I thought the project, saved to my flickr, was proof-of-concept. i was happy with my experiment.

I turned to the question of a leading actor. I created Joe Tom, pictured above, from some modeling clay. i already have a painted van which will be the other character in the animation, named Van. I used a better camera to create a new 3 seconds of animation. Then I recorded some narration dialogue I like the way it came out.
My friend

queenseye will kindly do the score for the short film i intend to make.

The next scene will involve the van on a desert road. I have green clay with which to make cactus. I want this scene to be at least 20 seconds long, so I will have to design an interesting road.

This should take me a month or two , but it will be an interesting project.