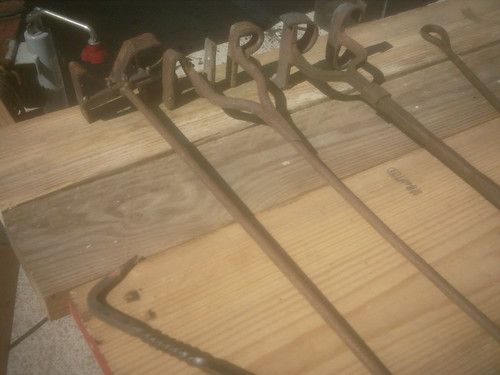 "I don't think orange is really your color, Uncle Bob", my niece said, as we looked at the men's swimsuits at J.C. Penney. We settled on brown. We went to the natatorium, swam the lazy river and slid down the large slide. I spent ten minutes relaxing in the mid-size pool which serves as hot tub for the adults.

Prior to our sojourn to swim, we visited the Allen Train Depot, where they were celebrating Sam Bass Day, a day named for the fellow who put Allen, Texas on the map by robbing a train there. At this soiree' we watched men do blacksmith work at a forge which looked to me rather like an outdoor BBQ grill. Then we saw "sample rooms from olden times" and a lot of cool photos.

After our swimstravaganza, my niece spent the early evening making the three of us a simply heavenly meal of grilled scallops and shrimp, served with perfectly-seasoned bowtie pasta. Dessert was angel food cake covered in a kind of raspberry savory sauce. We settled down to a rented movie in which Keira Knightey was beautiful, oppressed and yet very modern and winning.

I will skip the narrative of the Frozen Yogurt interlude in mid-afternoon,
save to impart one crucial word: snickerdoodle.