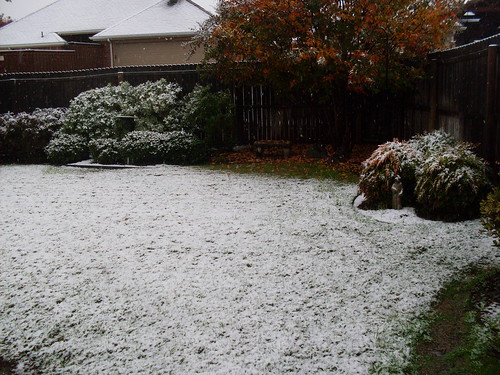 I woke today to find a light dusting of snow. By the time I was halfway through my commute south, the snow had dissolved into rain.

I got my CD in from the German artist Entertainment for the Braindead. When I mentioned on twitter it was coming, then three people asked for copies. Because Entertainment for the Braindead liberally licensed her work, I could share it with them without guilt or transgression. Later, I realized that one of the requestors lived in the same city as the artist. The virtual world is closer than just across town, sometimes.

I stopped in The Thrift Store to shop for one dollar CDs today. i have a friend who loves heavy metal, so I hoped to find a lot. The Thrift Store in Garland is comprised of goods so inexpensive and so downscale that a Good Will seems like Barneys New York by comparison.

I noticed that they had scads of CDs by a self-released artist named
Aaron Kaplan. I liked that each CD had the release number AK 0333. Each identical CD advised me that i would experience
some amazing experience from listening. I felt badly for Aaron Kaplan, with his unopened DIY CDs all sitting, forgotten, in the Thrift Store. I bought one, so that at least one person in this world not related to Aaron Kaplan would own one. In the way of the internet, this may trigger a google alert to let him know he had a listener.
Who knows? He may have thousands. His type of music is not my favorite, being neither quite classical enough nor quite anything else, but instead being one of those sentimental melds. But it's pleasant enough music.

I also got a CD of Nielsen, a CD of Bruckner's 4th Symphony, a Saul Bellow novel and Freeman Tilden's old vintage book about the national parks. among other things. Sadly, there was no metallurgy in the CD section.

Tonight my wife comes home after a business trip to the deep South. I am glad she's returning at last.