expert for a brief moment 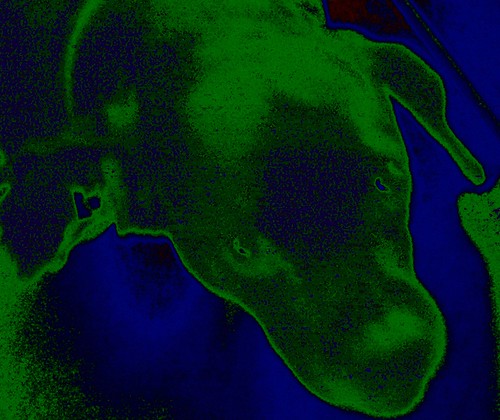 Our dog Bea in green and blue, originally uploaded by gurdonark.

Tonight my wife went out for dinner with some of her friends. I was tempted to go to Uncle Calvin's coffee shop for the weekly folk music concert, but I am exhausted after a very hard week of work.

Tomorrow we plan to drive into Dallas where the Texas Discovery Gardens has a class in butterflies. I'm looking forward to learning a lot.

I'm enjoying postal chess on-line at Schemingmind.com. I used to play at the International Correspondence Chess Federation, until i realized that its lax rules permit players to be computer-assisted. I do not want to play matches of my computer v. another's computer,
so I switched to Scheming Mind. It has rules. I enjoy Scheming Mind a great deal. It's free, with an optional 20 dollar a year "suscriber" level, I like any fun thing that costs only 20 dollars a year.

This week I drew one game, lost another, am about to lose another, and will soon win yet another, when my opponent, 6 pawns down in a rook endgame, finally throws in the towel. My rating right now is over 1800, a "SM Expert", but it will decline in the next rating cycle. Still, my overall play is not bad--and I'm having fun.

Tonight as I drove on our little street, I saw several songbirds harrying a small hawk. The hawk seem indifferent to their protestations, though he did not make any lazy circles in the sky.

I'm so glad it's the weekend.