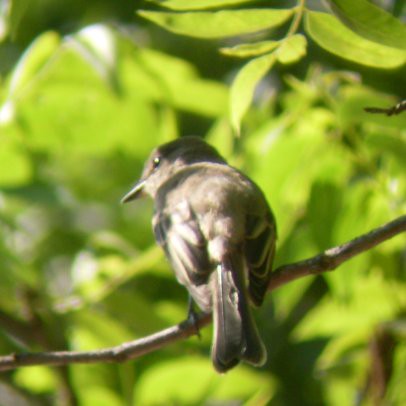 Bird in a Tree in May, originally uploaded by gurdonark.


As is my wont, I arose early. Today I found that my dog Beatrice found an early morning pastime of interest to her. She is able to access our back yard through a dog door. She began to bark just outside the door. When I went to see what was the issue, I found her barking around our little stand-alone propane gas grill. I looked to see if I could see a bunny underneath the grill, as once I had had to distract the dogs to permit a thumper to get away.

I could see nothing this time, and I even lifted up the grill and saw nothing. I lifted Bea up to look inside the grill, and we saw nothing.
After setting her back down, I again lifted the grill top, and finally saw the field mouse hiding in the grill.

I never mind mice so long as they refrain from entering my garage or my home, so I was puzzled what to do about this one. I finally combined pulling Beatrice inside and barring her from the outside, with letting her back out from time to time.

Finally, I left for the 8:15 a.m. church service. Today was Pentecost Sunday, which marks the entry into a new season in the Methodist church. The preacher gave a sermon I can only describe as vaguely Pentecostal, and some congregation members said loud "amens"
as if we were all in an 1878 camp meeting tent revival.

We even sang a medley of songs like "I'll Fly Away". I do not think, however, that this group of relatively affluent and relatively non-diverse folks people will be confused for the enthusiasm of the early 20th C. Azusa Street Mission any time soon. I like singing old time music, though what I want to try is shape note singing, and our church does more of the Word Publishing pop style than the more rousing minor chord jumble of the Sacred Harp hymnal. Still, I enjoyed singing loud during the traditional numbers, and one grandparent had a cute infant in a nice Spring dress on board, which is all well and good.

After church, I drove to Bob Woodruff Park, after ascertaining that the Renner Road hiking trail remains closed for repairs. Bob Woodruff Park is a huge park in Plano with a fishing pond and tons of space to walk or hike. I enjoyed looking at birds, and in particular watching black-capped chickadees flit from branch to branch

I love seeing "real" nature photography, and I'm always impressed how people get these incredible shots of seed-stuffed chickadees posing by bird feeders in the snow. As a point-and-shoot photographer, I can never get the chickadees to pose. They have a kind of Edie Sedgwick jarring fragility about them, which they nonetheless outlet in healthy ways, such as hopping from limb to limb eating things. I am still puzzling out some of my bird identifications, such as the tufted thing that looked too large for a titmouse and yet not quite the right color or behavior for a cedar waxwing. Being a novice at anything is a kind of sickly-sweet delight.

All morning long I saw birds descend to ground and then fly back to perch with caterpillars in their mouths. I took the above picture of a fellow whose identification I cannot make but whom I believe may be an eastern kingbird. By coincidence, when I stopped by Bethany Lakes Park after Supper, I saw a colorful customer that I believe to be the very different-looking western kingbird.

I watched the afternoon softball game between Georgia and Washington, which was well-played. The college softball world series has been consistently entertaining. I also watched part of the movie Pollyanna.

Most of my day I spent resting and doing house-work. I will spend my evening resting, doing house-work, and perhaps a bit of work-work.
I had a great telephone call with my father, though, and the weekend of rest has done me some good. I have the DVD of that French Christmas art film to watch on my little portable DVD player, so perhaps the evening holds the promise of cinematic delights.

When I stopped in Dollar Tree to buy a new bird feeder, the Kinks song about the lazy Sunday afternoon was playing.