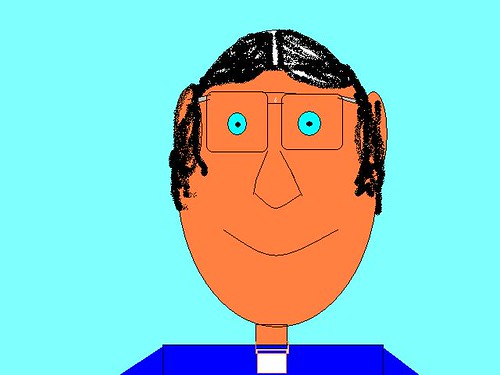 Friday evening I went to Love Field to pick up my 15 year old nephew, who flew in from Birmingham, Alabama. We drove home, and then my wife, my nephew and I watched the sequel to that film in which the dead talk to one through the static in one's electrical devices. If it comes to pass that I see dead people, I hope they are civil.

Saturday morning we awoke to cool, cloudy skies. My nephew and I drove to Park Hill Prairie. We stopped at Shipley's Donuts on the way.
The fellow there gave us ham and cheese kolaches rather than the sausage kolaches we desired, but the old-fashioned cinnamon rolls were nonetheless quite good.

We got to the prairie around 9:15 a.m., and fished until 11. I caught 6 fish while my nephew caught 11. Our catch (and release) was entirely made up of sunfish. I heard a huge "thwop" when a bass my nephew had hooked jumped from the water, but after a long fight, the bass managed to get the hook off the line. Yes, Virginia, there really is The One that Got Away. He must have been, after all, 10 lbs, my nephew declared.

I first took my nephew to Park Hill Prairie 9 years ago, when he was a little tyke of 6. He had to work to maintain his patience so that he could catch fish. Now he is 15, he is taller than I am, and more skilled at fishing. He hopes to start on the football team next year.


We drove back to the city. My nephew, my wife and I went to Pho Que Huong in Richardson for a bowl of pho each. I went and got my haircut after my nephew pronounced he needed a little sleep. I went to a local quick-cut place where a nice woman told me about her husband's fishing trips as she obliterated my hair using the impressive Number 3 shears, well-known for their hair-decimating skill.

My wife and I took our dogs for a walk while our nephew napped. We met a young girl with her tiny bike who assured us she had a baby ladybug. We wished her, and it, well.

I got a little sleep. Then we went to the movie theater, donned 3-D glasses, and watched "Monsters v. Aliens". Its fun animation and thin but jaunty plot appealed to me.My nephew said he wanted an Italian meal, so we walked the parking lot to a Macaroni grill. My nephew had shrimp alfredo, while my wife and I each customized a pasta. I went for a vegetarian whole wheat penne pasta in a light tomato sauce with a dry garden salad.

We stopped by Blockbuster, and rented "Marley and Me". Tbough my wife and I had seen it before, we enjoyed it in second viewing. My wife went ahead and watched the explanatory film. With palpable exceptions, I usually do not want my movies' back story explained.

Sunday we arose early and went to church together. Then we went to Mimi's, where I had oatmeal with brown sugar, raisins and bananas.
At home, I found a wing of a crane fly, which is also known as a mosquito hawk. We looked at it under my little microscope, and I digi-scoped a photo.

We all three headed to little Glendover Pond, where my nephew caught 6 sunfish and I caught 1. We rested a bit at the house, watched a Jimmy Stewart cold war era movie called Strategic Air Command, with lots of lovely stock footage of big jets flying in blue skies.

I drove my nephew to Academy Sports, where he got a Texas A & M sports t-shirt. I then took my nephew to the airport, and took him to the metal detector to get him on track for his flight. I stopped by PetSmart on the way home to buy dog bones for our loyal dogs. My wife and I took our dogs for a walk around the pond. We saw ducks and dogs. Then my wife and I had a black-bean-and-ham soup, and felt we had had a day. We had a good weekend with our polite young relative.