on larks and meadowlarks 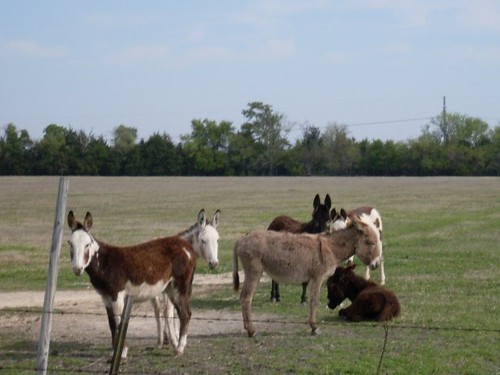 Today I got up before dawn and drove to Park Hill Prairie. I hoped to see wildflowers there. I found few wildflowers on the prairie, though I did see a few there and more on the roadways. I did see incredible meadowlarks, in full Spring color.

A decent part of the prairie had recently burned. Because the mowed walking path was not burned, the burn seemed to me the result of a controlled burn. This makes sense because northwest of us, Montague County was besieged by deadly wildfires in our drought conditions. A controlled burn would help avoid that--and actually might benefit the prairie, wihch is an ecology based on periodic burns.

I saw Texas-sized crows the size of vultures. I saw a great egret, fishing. I heard birdsong of many species. I also stopped at Sister Grove Trail, which had a large number of cardinals. Then I drove down country roads until I reached the highway home. On the way, I saw so many things that I considered cute--donkeys, bluebonnet flowers, goats, and ponies.

My wife and I had a great lunch at Elke's Market Cafe, where everyone knows her by name and the macaroons cause one to swoon.

Tonight I took a young friend fishing at the local park pond. He caught a nice little catfish--but then lightning flashed,and we called it a night.

I also created a jaunty song with my little cheap softsynth and a little imagination (and some great Creative Commons samples). As much as I wish I were a great music creator, doing serious pieces in an ambient vein, I probably have more fun (and get picked up by more viral video) when I do little wacky jaunty melodies that sound like just the sort of thing that might accompany a 1963 Super 8 home movie. We must all go into our own particular mystic, and my mystic runs at 24 frames per second, like a quirky cartoon.

When I burn incense, it is usually neither sandalwood nor patchouli (thought I like both scents), but instead the light-hearted comic-book scent of vanilla musk. I thought tonight of Jack Kirby comic books like Kamandi and the Demon--but I also thought of Richie Rich and Archie.

I read tonight about the Queen Wilhemina Inn, in Mena, Arkansas, because Mena has been on my mind. Sadly, a huge tornado caused some death and massive property damage in that gorgeous little mountain town.

I had been under the impression that the town was founded by Dutch settlers and named after a Netherlands Queen, but the truth is more complex. The initial railroad through the town was financed by Dutch investors in the wake of the panic in the 1890s, one of whose wives bore the nickname "Mena". My memory was correct, though, that Queen Wilhelmina never visited her inn--although I was amused to read that in 1927 the local paper printed eyewitness accounts of the Queen's visit (which never, of course, actually took place). Eyewitnesses always witness the coolest things that never happened.

How did the queen get to the Inn? The legend says she rode a donkey up the mountain. Then I read a fact from the occupation of the Netherlands by the Nazis in the 1940s. The Nazis, the article said, confiscated all the bicycles. I found a kind of poignant sadness in this indignity, a comprehensible, non-ghoulish form of tyranny amid a sea of unspeakable atrocity. It was as if I could wrap my mind around this horror, while so many greater horrors are so unbearable as to be difficult to incorporate into a simple thought or idea.

Tomorrow is Easter Sunday, the day of renewal and resurrection in my faith. As I think about the discord and poverty throughout the world, it's a time when the bicycles have been confiscated to make
impressive weapons systems for international warfare, tire-triggered explosive devices and armed gunboats for kidnapping on the open seas.

My late mother, who was in her own way a kind of Protestant saint,
always said that Easter was the one Sunday it was permissible not to attend church, so as to give those who attended but one Sunday a year an opportunity to get a good seat. Yet regardless of whether one celebrates Easter or Passover or "none of the above", my own hope (and in my case, prayer) is for a time when everyone gets a bicycle, guns are hammered into solar energy collectors, and unburdened donkeys walk up the hill to an inn built for a Dutch queen.