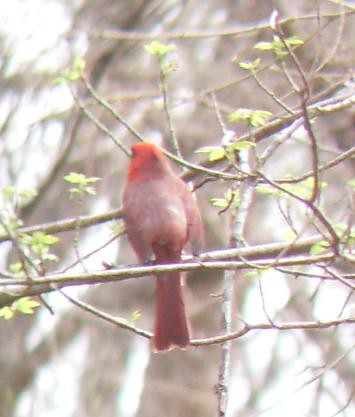 
The fine art of digiscoping involves a point and shoot digital camera and a source of magnification, such as a spotting scope or microscope. One uses the viewfinder of the superior optical instrument to frame the photo by the simple camera.

When I try to use my "good" pair of binoculars (a fine pair of Swift Audubons) to digiscope, I often find the challenge a bit difficult. I don't use a tripod with my binoculars, and a tripod is pretty much de rigeur.

Today as I hiked near Wilson Creek in McKinney, I managed to get a decent digiscope shot of a female cardinal. When I got home,though, I discovered that the bird inexplicably had turned her face away.

if I were 17, I'd probably make this post about romantic longing or
societal rejection. As I am 2.88x older than 17, I'd rather post about
the ways in which people turn away without really meaning to do so. Time heals most wounds, but time has a way of drifting, rather like that fellow's melting clocks, only less elastically.

I can think of two close friends from whom I've drifted over the years.I've known each friend for over 20 years. If I were to paint a stuckist portrait of each friendship, each would be a very representational image of myself with that friend, smiling. Reality, however, is not a picture-portrait, and in reality I could be much better about reaching out.

The good news, I think, is that this is not the short story in which some beast in some jungle springs or in which some little boy is careening towards destiny on a hobby rocking horse, or a bunch of folks are sailing on a ship of fools destined never to come home.
Instead, a card or a call may begin to re-build bridges.

It's better, I think, to spend time building igloos and ice bridges than to sit and drift on the floes.

I saw two red-bellied woodpeckers today in my binoculars, though alas i did not take their pictures. Colorful possiblities await everywhere--new sightings to make, new words and ideas to share.
I think that sometimes we are just called upon to do the parts that are before us--and that way lies some kind of kingdom within.