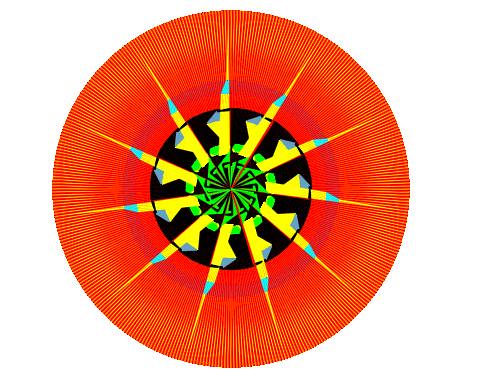 Photographic nostalgia so often gives way to sonic nostalgia for me. I hope you'll forgive me for a post which dwells on the popular music of the era I called home.

Grand Funk Railroad headlined the first rock concert I ever attended. The band's biggest hit by 1972, "I'm Your Captain", was my favorite song. That cassette was the first LP-length album I ever bought (the second, by the way, was Santana III). Tonight I did computer-program doodling, entering Logo commands until I got a pleasing shape. What came out was a rush of memories about midwestern pop-metal "hard rock" bands and the geeky, wonderful kids who loved them.

I had forgotten that "I'm Your Captain/Closer to Home" was
a solid, wonderful ten minute listen, but then, again, so is:
another favorite of my teen years, Carlos Santana's "Flame/Sky".
Carlos Santana's guitar playing transports me.

When Grand Funk Railroad's commercial break-through, "We're an American Band" came out, years later, the LP's were a transparent orange. This was the coolest thing ever--at least until Be Bop Deluxe's white disk for "Live! in the Air Age!".

I do not worship at the altar of my LP collection--but I don't mind at all casting my mind back to what was the most complex "simpler time" imaginable.

At the Grand Funk Railroad concert, which I saw when I was about 13, the opening act was Bulldog, a one-hit wonder the melody of whose hit, "No", stays with me as surely as their metal cover of "Rockin' Robin". I remember GFR played "Save the Land" and "Phoenix" and that lots of people in the audience other than me were smoking enormous, billowing-cloud quantities of marijuana. 1972 was a lot like that, really, people singing "save the land" and smoking as much as the air would hold. I wish I had bought a T-shirt.
Subscribe