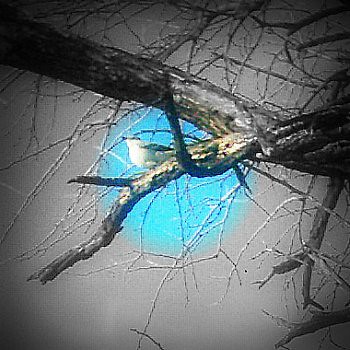 
Saturday we drove to the Dallas Convention Center for the auto show, only to find the auto show actually takes place next week. We went instead to the Dallas Museum of Art, where we toured the exhibit of works by the Danish/Icelandic artist Olafur Eliasson. We enjoyed the exhibit immensely, with its life-sized kaleidoscopic exhibits, play of ambient light in primary colors to create the optical illusion of secondary colors, and entire wall of reindeer moss. The exhibit is called "Take your time", because each stop required patience to "get" the full effect of the exhibit. Many other patrons, not surprisingly, sped through and missed the interplay of colors or lights that a patient review permitted. I was also impressed that unlike King Tut, which cost an extra fee to attend, this wonderful exhibit came with the price of general admission.

The exhibit runs through mid-March, and I will return to the ambient light and color display, mp3 player and ambient tracks from http://www.intelligentmachinery.net in hand.

Saturday evening we attended a concert at the McKinney Performing Arts Center. McKinney is the town just north of us, about 50,000 in population. Though it is in the Dallas metroplex, it feels more like its own town than like a suburb. They converted their old county courthouse into a very nice small performing hall, in the midst of their traditional town square.

This was the second time we had seen Duncan Sheik perform. Though we enjoyed both times, this performance was by far the more fun. Last year we saw Duncan at the Sons of Hermann Hall, a fine Texana-oriented place whose vibe is more "bar with concert chairs" than "performing hall". The acoustics in McKinney worked out far better for Mr. Sheik's melodic art pop. The audience at the Dallas show had included a lot of mom/daughter combinations who came not for the headliner but for Vienna Teng, a good singer/songwriter who has managed to figure out how to appeal to tweens and their moms as well as a 20something set. The McKinney audience was in the main a bit older, and much more energized by his performance.

Duncan Sheik has the fortune/misfortune of having had the hit song "Barely Breathing" at the beginning of his career, a fine song I enjoy singing along to as I drive. Yet at the past concert, one felt that the audience was "holding its breath" for the "hit single". At this show,
Duncan is coming off Broadway success with the musical "Spring Awakening", and the audience wanted most of all to hear his new unrecorded material from an upcoming play. It's great when an audience wants the artist to share something new.

Various members of his band, dubbing themselves Severe Joy, played an opening set, with three young singer/songwriters (with a fourth band member) playing their own tunes. I always enjoy it when singer/songwriters do a "split" on a live bill, as each plays their "best songs". Lauren Pritchard, who was in the cast of the Broadway play, and Holly Brook, who handles much of the backing vocals on the Sheik material, both gave good performances, as did the one of the fellows in the band, who had good song-writing chops.

I was pleased to see that Duncan's lead guitarist remains Gerry Leonard, also known as Spookyghost. He's backed everyone from Bowie to Suzanne Vega in the past, but his guitar style is distinctively his own. He utilizes sustained notes, a bit of delay, and a gentle touch to create atmospheric ambience which alters and enlightens every pop song it touches. I like that this particular guitar hero does it all with an understated, anti-Yngwie ethereal touch.

In contrast to the usual concert in which the hits come at the beginning or end, the "pop album" material all came in the middle.
The closing half dozen songs were from the play which premieres in Delaware in April. The play is a kind of ghost story, and the songs made the play sound fun and interesting.

After church on Sunday we met

tx_cronopio at the Magnolia cinema in Dallas. The weekend before the Oscars, that theater has an annual showing of the short animated films which received Oscar nominations. We got to see all five of the nominees, as well as a group of films from past years added to fill out a ninety minute experience. The short films were all breathtakingly good, with our favorite being a three minute French chase movie about octopi in love. We also had a good time having lunch at Tex/Mex restaurant Mi Cocina, and touring a cool garden store called "Gardens".

My wife and I took two walks when we returned home--one without the dogs and one with the dogs. The trees were full of mockingbirds and a cardinal. The pond was full of mallards. I also got a chance to take a picture of the lovely blossoms our little saucer magnolia tree is showing in our back yard. We had an active but very lovely weekend.