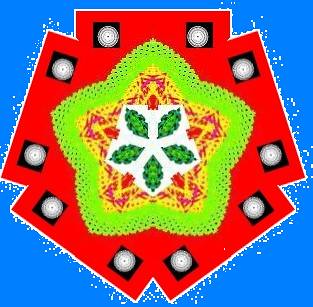 On New Year's Eve I came home from work at a reasonable hour. We went to Iravat, the Indian bistro in Plano. They had a special buffet for the holiday. I made myself a dhosa, the huge pancake-like bread rolled around a mix of vegetable and potato, and also ate salad, tandoor, and a goat curry, followed with kheer, the wonderful rice pudding.

We returned home and turned on the Twlight Zone marathon on the Science Fiction cable channel. We finished the episode "Where am I?", but then my wife fell asleep during the episode about the Martians in the snow.

I went on-line, and visited the Stillstream internet radio station, which is a great non-profit hobbyist station of ambient music. The station's functionality permits one to stream the music and participate in a chat room with other ambient fans as the music plays. The chat is always good, and the people interesting.

Every group has its own slang. In an ambient chat room, the "kiss of death" for an ambient piece is to be termed "new age". There is a kind of "High Fidelity" fan who considers that any ambient music which features use of the diatonic scale in any form (and in some cases, even use of any non-microtonal traditional chromatic scale) to be proof of creeping new age-ism, which is a lot like gingivitis, except sweeter and more cavity-inducing. I rarely throw the term "new age" around, unless the album cover features a woman who looks like she belongs on the herbal essence bottle in communion with a dragon, and the music is all titled "Re-emergence: 1", "Re-emergence: 2" and "Re-emergence: 3" and the music further sounds as if the muzak machine got stuck on the "sandalwood" setting. I am a "broad tent" ambient fan.

After some time in lively discussion, I went to other sites I visit. I played a Scrabble move on Facebook against an opponent whose play is less "new age" than "new world order", which is good for my humility, which might otherwise suffer from law practice.

I went to the space two: patalab site where Sam Renseiw has a fine voodle which intersperses scenes of a woman walking around the golden temple in Kyoto with hypnotic scenes of the dance steps of Danish dancers, sound-tracked by a reading of a Shelley poem.

I left a New Year's greeting for Sam, and then left one for Kaer Trouz, whom I know through the remix community CCmixter and who creates rock-inspired vocals and electronica pieces that I enjoy.

Today I am grateful to Krazy Dad, whose simple site to make photos into kaleidoscope images fits neatly with my current geometric design jag.

I am grateful to Andreas Michener, a fellow doing graduate work at a German University who wrote AUCB Logo and released it for free, which has made my Autumn and Winter more fun.

Today we will go see a movie, and perhaps I'll walk in a state park where Winter robins gather by the thousands. I'll think of all of you, in your disparate and appealing lives, in your triumphs and your tribulations, and I will nod to the cedar trees, by way of wishing you a New Year's joy.