What goes up, spins at 45 degree angles, and then turns 180 degrees. 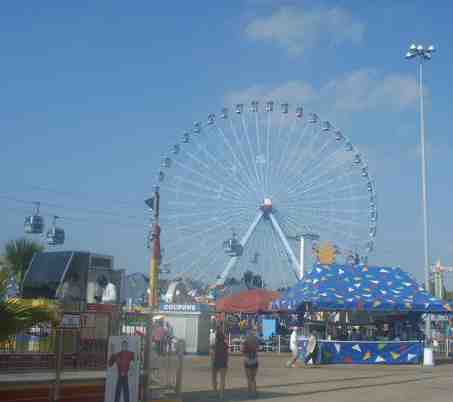 Today my 12 year old friend and I caught the 7:35 a.m. train so that we might attend the Texas State Fair. Partisans of the University of Texas and University of Oklahoma football teams crowded the train, as today the Cotton Bowl in Fair Park featured this annual football game.

We navigated the train-and-shuttle-bus system in good order, as it capably processed literally hundreds of passengers from trains to shuttle bus to Fair Park in very good order.

We made immediately for the animal section of the fair (stopping only cursorily to split a funnel cake, an unduly unhealthy fair standard). We enjoyed the large petting zoo, and also toured the pens in which the goats were being readied for their moment of being judged that very morning.

Then we went to ride the three rides we had allotted ourselves. The first ride was the only indispensable ride at such an event--the Texas Star ferris wheel. Because most people attended the football game, we encountered almost no line at all for the ride. We enjoyed seeing the city on a crisp October day.

We then went to a ride which worked like a centrifuge, and enjoyed being pasted to the wheel as it spun at 45 degree angles. Then we went to ride a ride that sent its riders to unfathomable heights at head-spinning angles with rapid ascents and descents. My normal philosophy of such rides is to be a bit blase' about them. Yet this ride instilled in me more than a bit of fear of the "only one cheap carnival safety measure has to fail to make this less than perfect fun for me".
I found that a mixture of closing my eyes and opening my eyes got me through the ride. I suppose I should have had a clue about it when the attendant had us remove everything from our pockets, our glasses and our last best hopes for peace prior to getting on the ride.
I am glad I rode that ride, in retrospect, as having done so I may now nobly decline to ever ride that ride again. With hindsight, the bumper cars were much less expensive than this AIG-spa-priced behemoth, and much more my speed.

We then hit the arcade, at which darts were thrown at balloons, baseballs were thrown at stacks of alphabet blocks, balls were rolls off signs bearing the visage of either Sonic or Tails (I cannot remember which) to try to land them in baskets. Betweeen us we won two small toys for my friend to take to his younger sisters. The price per toy rivalled a federal bailout, by the time all darts were counted and priced.

We then made our way to the show stable, where the trained dog show was getting under way. I always enjoy this 20 minute array of multiple frisbee snags and diving labradors. Only the Austrlian sheepdog tour has the same glitz.

We then wandered the mid-way trying to find the little fake tattoo transfers booth, but locating only the henna tattoo booth, which I had to explain to my young friend was not quite the same thing. It's really a shame we never found it, as I would no doubt benefit from a temporary tattoo of an anchor on my shoulder.

We then caught a train to Mockingbird Station, where we dined on teriyaki at a Japanese restaurant and then rode the train back to Plano.

I am reading A. J. Cronin's "Shannon's Way", which I believe I have read before. I very much enjoy the plotted stories of the 20s--50s, written with a kind of unpretentious intelligence that is intended nearly purely to thoughtfully entertain.

I noticed that the University of Arkansas Razorbacks pulled off an incredibly unlikely upset over the Auburn Tigers in the sport of football today. I know that I am marked with the Razorback DNA common to those who grew up in my home state, because seeing a box score of an unlikely result by my alma mater has boosted my self-esteem no end.

Perhaps that second slice of cheese pizza tonight was a mistake, but if I am to make mistakes, then I will make them gently, with mozarella on top.