morning in the meadow 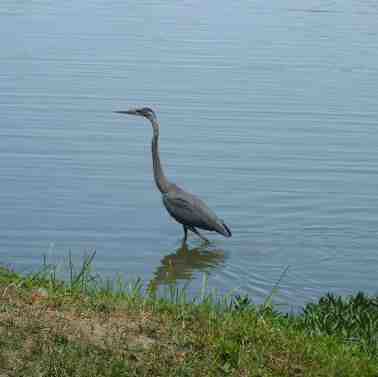 We've had a splendid weekend thus far. Thursday night we went to see the movie Hancock, which did not move mountains but proved a workable watch.

I rose early Friday morning and took the dogs for a walk at 6 a.m. during the relative cool Later Friday morning we drove to nearby McKinney Towne Lake Park, where we hiked the nature trail in surprisingly temperate heat. I got "this" close to a great blue heron, resulting in the picture shown on this entry. He was gorgeous.

After a sandwich at Which/wich, I went with my wife to see the children's movie "Kitt Kitredge: American Girl", which, far from being the mere product placement for a doll it might otherwise had been, proved to be a very entertaining children's movie.

The message of the movie, about how we all need to be considerate of those less fortunate than we are, surely resonates in this time of oncoming economic troubles. The sense of empowerment for girls based on pluck and thrift and not having things handed to one (but giving freely to those in need) is something every child under 14 )and a good number who act 14 but are over 40) should learn.

Friday night we met our friends Scott and Donna, who had discovered a non-chain Brazilian steakhouse. Although I did much better than I might have done in avoiding over-eating, I still ate a bit too much. I loved in particular the grilled pineapple with cinnamon. We had a great time talking to our friends until a late hour. I was rueful for having overeaten, but I do not live in obsession about such matters.

This morning we rose early to go to very nearby Connemara Conservancy for a free guided bird-watching walk. I had never been on a birding walk before, and it was, in a word, sublime. The guide called out the songbirds by name, and spotted so many species of birds for us. We saw dickcissel, indigo bunting, ruby-throated hummingbird, scissortail flycatcher, green heron, western kingbird, and a host of other things. The meadow is a former farm whose owners had the foresight to dedicate it to a land trust to avoid suburban sprawl. After too many local owners and their dogs began to ruin it through overuse, the land trust board wisely closed the park except for guided bird walks and hikes. The meadow is back in fighting fettle now, and the birdwatching was lovely. I will attend this monthly event again in a few months.

In the afternoon, I picked up the friend I met through the Big Brothers mentoring program. He and I spent the afternoon playing music.
We played tunes on the can-jo. He figured out how to play the same tunes on the little diatonic bontempi trumpet I got from a toy store.
I showed him how to use Pivot Stickfigure Animator software, and he made two nice little cartoons.

We took Ted and Bea to the park for a walk. in the park. The heat was so oppressive we ended up shuttling them from shade tree to shade tree, but for all that they loved the walk.

Then we sat down at the computer and did a different form of experimental. I recorded my young friend singing a single note of "ahhhhh". Then I pulled up a melody I wrote last weekend on my software synthesizer, Sawcutter 2.0. I imported the sample of my friend singing "ahhh" and had the synthesizer use it to write the melody. Then I recorded the resulting wave file.

I put the resulting Sawcutter wave file into Slicer 1.0, a freeware sample slicer from IXI Software. Slicer sets up a graphical display of the controls on the wave file. My young friend was thus able to use the mouse to "play" the song of his own voice, changing it radically. It was like being able to put oneself into a synthesizer and play oneself like an instrument.

Tonight my wife cooked this amazing baked sole, and then we watched the DVD "August Rush", a pleasant fantasy about how all sound is music, and music is everything.