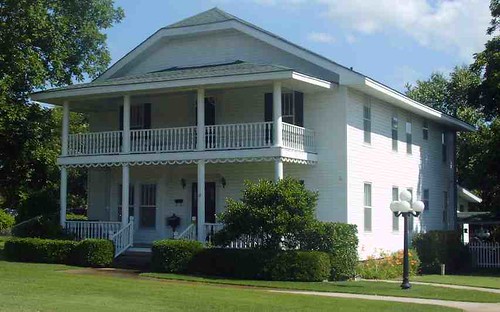 Where I grew up, 30 years later, originally uploaded by gurdonark.


Friday night I drove to Camden, Arkansas, where I finished high school, to attend a reunion of the Share Singers, a Methodist youth choir in which I sang (poorly) from age 16 to age 17. My wife's work right now is even busier than my own (a bit of a role reversal), so that she stayed behind with our canine friends.

I enjoyed speaking with my father late Friday evening, before getting a good night's sleep. Then I walked from my father's home on Washington Street to downtown Camden to the First United Methodist Church. In the back, they have a very nice reception area built, like a little gymnasium.

Incarnations of the Share Singers existed from 1971 to 1984. Camden was then a town of roughly 16,000 people, and kids joined this choir as a regular Wednesday evening "thing to do", without a great deal of worry about whether one was of the Methodist denomination.

The group sang lots of four-part harmony, which I always found very challenging. My baritone fell too low to hit the tenor notes properly, but not low enough (then) to do a convincing bass. I joked later that trying (and failing) to sing tenor in the Share Singers gave me a lifelong love for unison.

Of the roughly 250 people who had been Share Singers, over 60 turned out for the reunion. The youngest alumni would be roughly in her or his late 30s, while the eldest would be in the mid-50s. The Share Singers choir director was a local fellow whose skills at the keyboard were simply phenomenal, and whose skills as a choir director always solid, demanding and yet congenial. I've always known that any failings I had as a choir singer were my own failings, and not the fault of this really gifted director.

In high school, I remember Share Singers as in the main quite fun, except for the part about having nearly no command of pitch in the higher register of my effort to do without falsetto on the tenor parts, and no command of my breathing in any register of any of the songs. In the late 1970s, though, when I participated, I had had the recent experience of being a young teen who liked a lot of bands like The Sweet and Sparks whose vocalists used a lot of falsetto, so I always enjoyed any song high enough to sing in falsetto. I had a pretty good falsetto, though it was not really quite the "done thing" to resort to it so often.

I was pleased and surprised when I arrived at how many people recognized me and came and said "hello". I think of myself as having only attended Camden High for two years, and as having been awkward and non-descript . If others thought me that way, they were far too polite to say so.

I remember,with amused chagrin or chagrined amusement, the math class I had with one woman who did not attend this reunion. Every sentence I ever said to this woman came out as an unintended double entendre. I would credit Dr. Freud, but I think that Miss Malaprop or Reverend Spooner would be closer to the actual copyright-holder.

To this day, that woman perhaps credits me with a raging vulgarity I did not actually possess, although I never think it is necessarily a bad thing to be thought "poor white trash" if one is, indeed, living in a small town in south Arkansas. No doubt now if I met this woman I'd try to explain--and it would all come out worse, somehow. We spend our days post-adolescence thinking of wrongs we would right, only to find, when the circumstances arise, that nobody remembers our names, much less the wrongs.

After a breakfast of nice home-made pastries and fresh fruit, we all adjourned to the choir room. The choir director and the singers connected immediately. I was touched to see the mutual expressions of fondness the folks there exchanged. We practiced for ninety minutes on songs which had been sung by various choir incarnations years ago, and were to be sung at the next monring's church service. I was struck with the patience and technique with which the choir director led these non-Triple-Crown winners through the gates on the way to the singing chutes.

We broke just after noon, and I slipped into the German bakery, Stroope's,for a gingerbread man. I found, on my exit from there, that my father, eager to have me home for lunch, had driven down to pick me up. We and his wife lunched on her excellent vegetable soup. Then it was time for my father's rest break and his wife's shopping trip. I drove to White Oak Lake State Park, and hiked the trail. The campground was full, but the trail empty, and I loved walking in the woods with cardinal and mockingbird song sounding all around.

When I had finished hiking, I realized that I could nip the twenty miles down to the town where I grew up, in Gurdon, Arkansas. I passed a graceful young buck deer on the road to Gurdon. Then I pulled into this small town of roughly 2,000 people.

I drove by the downtown, in which most businesses I remembered were gone. I drove by the old grocery store that Mr. Austin (Capps) ran, now a derelict building with an empty parking lot. I drove by the home we lived in when I was a child, which looks even better now than it did when we lived there. It looks like a grand southern home, but in fact it was a railroad boarding house, with faux greek revival columns made of a hollow metal.

I enjoyed snapping pictures of the old railroad depot, of the old downtown, and of the primary school. Then I drove back to Camden, stopping at the Little Missouri River to take a picture of its small but charming bridge.

I went at 6 p.m. Saturday to a get-together at a nice home literally located on Memory Lane. Long-time readers of this journal know that I am not good at small talk, loving big talk and abstract talk and animated talk and "right thoughty" talk. Yet I found myself hearing such interesting stories. One fellow, a fellow physics graduate, plays one of those horn synthesizers at his church, making it sound like whatever instrument he wishes. One woman told me of her ten years of Burning Man festivals. Another woman told me a bit about being a clinical social worker with a heavy caseload, while another fellow discussed meeting with Senator Obama. In general, one big Arkansas/Texas difference is that at a party, one assumes most Arkansans are Democrats, while most young Texans in a similar function are often Republicans.

I really enjoyed seeing everyone, and if I am not yet a social butterfly, then let me admit to being a brown grasshopper whose wings sometimes look slightly like a buckeye butterfly. People kept saying to me "You haven't changed a bit!", which always makes me both pleased and worried.

The Sunday church service was great fun. I loved singing bass parts, instead of the tenor notes I couldn't hit. I loved singing "Jacob's Ladder", and even hit the tenor notes at the end when nobody else was singing tenor. I am not sure I hit them on pitch, but let's take this singing one step at a time. I sang with an enthusiastic sense of joy, and hope, in retrospect, that my joy did not detract from the experience for the audience. I find often that my most joyful moments turn out to be an aesthetic affront to someone or something. I have found that it is better not to worry too much about this. I was not nervous at all, and I felt as if I were smiling as I sang.

During the offertory, the choir director did a piano solo in which he took several 18th and 19th Century traditional gospel standards and put them in a really cool arrangement which was complex and delicate. During the sermon, the minister recalled an incident whose story I once knew but had forgotten, about how the choir director had once done wedding music based on "On Top of Old Smokey", disguised expertly so that everyone thought it merely classical wedding music.

I have a keen love to this day for baroque and early classical organ music, because when I was a teen this fellow played the most amazing preludes on the little church pipe organ. Indeed, when I make spacemusic ambient, I am not oblivious to the joy of organ drones.

Now he does the music at a much larger church in Little Rock, the state capitol,and is the director for a men's chorus that people say is really good. But today, he was graciousness itself as he spoke to the congregation where he grew up.

After the service, they had a special lunch of fried catfish, hush puppies, sweet pickles, salad, and french fries. I limited myself judiciously to one piece of catfish, which was heavenly. It was good to have lunch with my father and his wife, and to speak once more with school folks from long ago.

The whole experience was grand, and I'm so pleased it worked out so well. It made me want to teach the world to sing in perfect harmony, but in the wrong key. I still would rather sing in unison, but I loved that there were so many nice people with whom to sing.