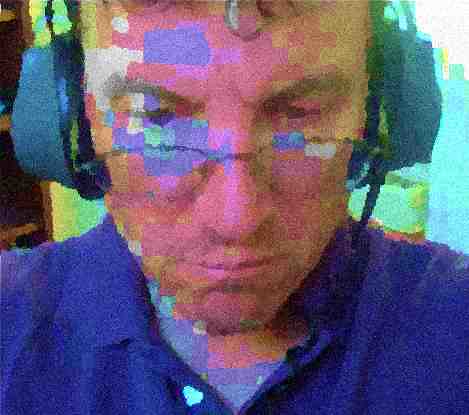 Last night I read essays by Rudolf Bultmann, the German theologian, about the essence of faith in a world that outgrew some of the language of myth. I continue to be intrigued by the idea of being unencumbered by the fear an over-dogmatic existence can involve.Bultmann sought to reject a clinging to a literal notion of mythological language when they no longer match reality. He instead argued to find the meaning in the language of myth.

This week I learned a Dutch word, "Stipjes". It means "dots". I heard it in a song by my friend Marco Raaphorst. Each week, Marco posts a "soundimage". He takes a picture from flickr.com, and then he writes a song to it. This week's song features words by his friend Karin R.
You can see the image, and hear and download the song at:
http://www.marcoraaphorst.nl/2008/05/26/klankbeeld-raaphorst-grijs/

"I would like to wish for Sun.
I wish that the sky was polka dots,
polka dots tinged with red.

"If only the clouds could be colors--
like a rainbow" ,I wished all along the gray road.

I would like to wish for Sun.
I wish that the sky was polka dots,
polka dots tinged with red.

Personally, I rather like gray, but I know what the song is saying.
I know, too, that some people encounter far more gray in their day to day life than the fashion police should allow.

I love the taste of a clementine--a tiny orange fruit which is particularly sweet. Its compact wonder is that it provides a burst of flavor--almost an accompaniment to its bright color. I love its sheer concentration of simple, child-like miniature sight and sound. A clementine is like the joys of authentic living--a simple delight in a grace available to all.

Yet we all see the clementines of the world squeezed dry from time to time. What's worse, sometimes things get run through the juicer,
and then the juice is discarded, and all that's left is the greying husk.
I wish for a sky of red polka dots, and all the world turns grey.

I like to live as if each scientific discovery does not murder an angel.
I want to live as there is more to the world than dreary gray skies.
I need to live as if the kindness one expresses counts for more than the money one makes, or the talents one has, or the charm one exudes. I believe in a sharing economy, a love for things both seen and unseen, and a child-like shrug in answer to questions.

I believe in living as if faith were neither outdated nor wilfully delusional. I live in a rich blue sky, with clementine clouds.