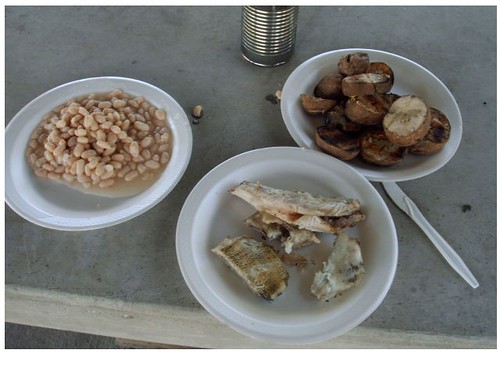 laruth posts images of restaurant meals and desserts which impress me with their presentational charm. The fellow the playwright suggested that all the world is a stage, and all the people merely players, which we can re-mold to suit our fancy to say that all the world is a kitchen, and we all cook up our own fun. I pause, soberly, to wish for a world in which the herbs and spices were more evenly distributed.

I present this evening pictorial evidence of a less sartorial feast.

Today my young friend and I left Plano at 6 a.m. to go to Park Hill Prairie. We had with us charcoal and two potatoes. I had hoped to pick up some local produce squash on the way to the prairie, but we were too early for the farmer's market. Parenthetically, this really is a spitshine world when one can be too early for a farmer's market at nearly 7 in the morning. By 7 in the morning, even the barbers should be in full swing. It's as if the world went from being about ham radios and right work to being about the internet and lolcats.

We stopped in one store to get bait, and then in another store in tiny Merit, Texas. I had hoped that store would stock a little produce, but
instead we had to settle for a very hip and happening can of northern beans.

We were set up for our pond visit. We had a few hours to fish. Either we would catch fish, or we would dine on grilled potatoes and heated beans.

The weather was on the warm side of fair, starting at 70 degrees when we arrived at 7:15 a.m., and heating up to around 90.
We saw lots of great scenery. A huge flock of cattle egrets came and roosted in a willow tree near the ponds. A great blue heron flew surprisngly close by several times. On the road to the the prairie, we saw great masses of Mexican hat flower, which is a variant of black-eyed susan which looks like what its name suggests. Vultures and hawks flew while birds sang. Cattle "lowed" in the distance.

We fished with earthworms and simple tackle. I caught 18 fish, while my young friend caught 8. However, most were not large enough to keep. He caught a very nice small bass, just over keeper size, and we caught an additonal three sunfish of keeper size. Then we adjourned to a picnic pavillion by a pond, which, we had to ourselves, as Park Hill Praririe is rarely over-run with tourists. A few people were parked at the other end of the park, attending a prairie hike I had hoped we might join, but we had bigger fish to grill.

I had not cleaned fish in years, being a firm advocate of catch and release. I am an omnivore, though, and can clean and consume fish with the best of them. I cleaned the fish, and then we scaled them.
We lit the charcoal, and began cooking things.

The can of beans--cooked in the can so as to avoid the hassle of pans, the potatoes and the fish all have different cooking needs.
The beans can needs open flames with which to come to a boil.
The fish and the potatoes need simmering heat from charcoal, but the fish need only 10 minutes, while the potatoes took longer to cook. I had sliced the potatoes, a wise move, but sliced a few too thickly, a very unwise move.

Still, with a little creative flaming and turning and re-heating and the like, we eventually had a perfectly edible meal (pictured). We divided it into two portions, and enjoyed our meal. The beans came out the best, the fish was succulent and salty sans artificial salt, and every potato that was not too thickly cut was a joy to eat. We then picked up all the tihngs we brought, appropriatedly discarded the trash, and headed home.