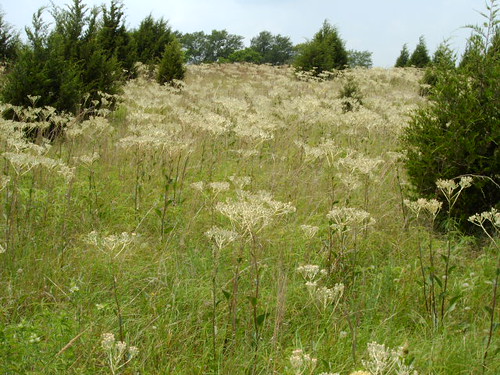 This afternoon I walked on Trinity Trail, which winds along Lake Lavon. I saw thousands upon thousands of wildflowers, and hear a tuneful myriad of birdsong. I cannot recall a time when so many small flowers were present at once on the trail--Indian blanket, showy evening primrose, an dozens of other varities.

The walk was on a day in the 90s, with the air uncharacteristically muggy for Texas. When I stopped near "Hiker's Point" to have a seat by the lake, I spent several minutes reading the book "Discord", about the anatomy of an ominous financial reverse and collapse of the Vancouver Symphony Orchestra sone years ago. This book interests me, because the nuts and bolts of how business enterprises function always catches my attention. So often the best intentions cloud judgment.

It's not just the dollars and cents thing,though that's interesting about how business works--I'd also love to tour the Ocean Spray cranberry factory in Sulphur Springs, Texas, just to understand how it works.

Lately I discovered Open Clip Art, a public domain resource for downloading free public domain clip art. I began to read up on the .SVG format, a format hitherto unfamilar to me, but which provides an open source way to save vector graphics.

I also got a request to write 7 seconds of "surf music", so I promptly worked out 9 rapid-fire seconds of a stringed cross between Dick Dale and the Ventures, only to have the request modified to instead seek something more in the Beach Boys ballad division.

I bought seedless grapes from the new fruit vendor, which were just lovely. For dinner, we dined on seafood--and my salmon was "just right".

I got a haircut at the local franchise place, and the nice woman who cut my hair said I have "nice hair". I find that I have "wavy hair", which must be either trimmed very short or, as in the late 1970s/early 1980s, be feather-cut and then blown dry for an hour each morning.
In those days "short hair" was actually pretty long, as pictures of the era now reveal. I told her that I had been to Trinity Trail, and asked if she'd ever visited there. She said she lives just down the road from it, but takes it for granted because it's local. I urged her to go see the wildflowers there.

A nice woman from Spain wrote a series of complimentary comments about some of my youtube videos. A little unlooked-for praise can brighten up a day.