Fallen Tree in a Texas Creek 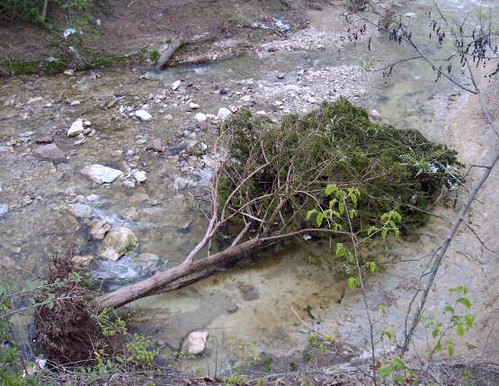 Fallen Tree in a Texas Creek, originally uploaded by gurdonark.


Yesterday I met my brother and his son for a lunch at Little Szechuan in Plano. The wait person diligently ensured that the preparation of my chicken and vegetables arrived as requested, entirely steamed with sauce placed entirely on the side. I love simply-prepared food, which, to me, acquires an extra heartiness (and provides me with an extra hardiness) if cooked without unwanted smotherings.

We talked at length of school matters and future plans, as my nephew turned 16 this year and thus becomes entitled to make plans to guide his future schooling. Rather than dissect the minutiae of that personal discussion, though, I'd rather discuss the hike my nephew and I took after lunch.

We drove to nearby Spring Creek Trail, in Richardson, at Renner Road, just off the Central Expressway. I love this riparian setting because its sidewalks run through a deep woodland, in a city whose few woodlands are often not well-developed for hiking.

The chil in the air was mild, but the skies looked like rain. This was a huge advantage, as we and two cyclists had the trails to ourselves.
We saw a good-sized young tree which fell into the creek.

Hiking with me is perhaps not an exercise in linear destinations. We found ourselves at one point separated by Spring Creek from the trail out of the park. We elected to ford the creek. I am usualaly very reluctant to ford a Spring Creek, as I watch the news about silly teens who do daredevil things in rain-swollen creeks. Fortunately, though, this creek was modestly flowing and the water was less than a foot deep. We each took off our shoes and socks, and rolled up our pant legs, and crossed. My nephew went first, and we both learned from his experience.

The problem and the solution proved to be the same--the rocks. It was a "Pride and Prejudice" moment. The larger rocks were charming and smooth, and appeared to offer every comfort and delight. In fact, they were the dangerous rocks, upon which one flailed and slid. The small, dependable stones, grounded in gravel and solid earth, looked uninviting but provided easy crossing.
We each made the crossing of roughly 30 feet of creek without falling.

We adjourned to The Main Event, a combination bowling alley and arcade. We have a joint motto about such places. This motto runs "Remember, no matter what, it is not about the fun, it is about the tickets". This motto means that we play any arcade game, no matter how silly or limited, if it offers the chance of winning tickets to be counted towards an over-priced and under-valuable prize. We play skee-ball, we punch the button to try to make the Wheel of Fortune spin, and we try to make the bouncing ball land in the impossibly small hole. It is all about the tickets one is awarded.

We learned to our delight that there are no longer literal tickets. Now a computer automatically keeps up with the points. Soon my nephew amassed 520 tickets while I amassed 420 tickets. It turned out that 900 tickets purchased a radio-contolled car, so we got that for my nephew. I spent the other 40 tickets on "poppers", by which I mean not the heroin drugs which scourge our fair city, but instead little plastic disks whose sole function in life is to be flattened and to pop back up. We had a glorious, ticket-filled afternoon.

Last night my wife and I went to Arlington Convention Center for the Big Brothers Big Sisters Volunteer Appreciation Dinner. We watched awards being given to people with inspiring stories. We met cute college kids from Abilene who mentor kids in the local schools. I spoke with a Big Sister who was relatively new, as I am, who advised me that in her little sister's life, which band is very important, and Korn is most important of all. I remember being 13.

I was very inspired, and yet thought of things I could do to help others I do not do, and thus was a bit inwardly chastised, too. I was intrigued that one award recipient told an anecdote along prosperity gospel lines both irrelevant and inappropriate to the setting. I am in awe of the power of coincidence as anyone, and yet I imagine the root of all being in burning bushes and whirldwinds and horsehead nebulae and acts of simple kindness. I do not often imagine that every field goal is three points for justice, or that every sale made is
an outgrowth of the personal virtue of the seller. It's a fine line, between cause and effect--but I prefer simple kindness to simple
self-congratulation.

Yet even here, it is too easy to be dismissive and judgmental. I find often that great trial lawyers also need a certain kind of ego and a certain successful struggle with self-doubt. Similarly, entrepreneurs often need to feel special to justify an ability to obtain special results.
The fellow who gave the odd speech also did a world of good at that organization. Who am I to judge?

Today I did a work project of tremendous interst not suited to this narrative, and then found to my delight I have succeeded in losing some of the weight above my "goal weight" that I wished to lose.
I am now 214, when my target is 210. I know that I can resume that target. May will mark three years since I began eating more healthy food--last night I even managed to limit my chocolate cake intake to two bites of a wonderful piece. I felt like those people in the self-help book about how French women stay thin. It was probably the first time I have felt an affinity with rather than a mere attraction for French women.

I had great reaction to a remix I did recently, and I am eager to get samples in from friends in the Netherlands to complete the album I am working upon. I have 9 songs of 11 or 12 done, and then I will ship the album off to the fellow who co-owns a netlabel, because I believe they will then release it into the ether, like a balloon hunting Kansas.