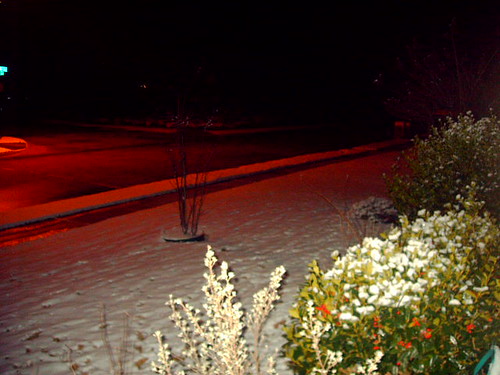 Snow under a red streetlight, originally uploaded by gurdonark.

Today I arose prior to 6 a.m. for a 6 a.m. rendezvous tp begin a fishing trip. I arrived at 6 at the appointed destination, only to find that
my trip would re-schedule until 7. That worked out pretty well, as I was able to use the intervening tomorrow-and-tomorrow-and-tomorrow-petty-pace-creeping-time to pick up a warm confection called a "cinnamon bow tie". I always wonder if ennui would be diminished if more people could find joy in a 6:15 a.m. cinnamon bowtie.

Despite a morning tour of three ponds and one lake, the fish count came in a 2 small sunfish for me, 0 fish for my friend. However, a slightly belated 12th birthday gift, in the form of a can-jo, proved an immense hit. Soon, as we drove between sites, we were serenaded by the strains of "Go Tell Aunt Rhody" (personally, by the way, I would rather not be delegated to tell rather dubious aunts about geese mortality) and "frere jacques".

During one stop I was asked to show my own prowess at the can-jo, and, with the aid of the sheet music, did a very credible "Amazing Grace'. My street credibility benefitted immensely.

I maintain that the can-jo is the next best "peoples' instrument" after the kazoo, and that only the software synthesizer Sawcutter 2.0 holds even a dim and failing candle nearby. I love the way that so long as one thinks diatonically in one octave, one can do anything. My kudos to the fine craftsman at Florida's "Smokey Mountain Dulcimer Works", who applied a green bean can to a fretted stick for resale on eBay to create a thing of beauty and a joy forever.

We stopped for pizza by the slice at a little storefront called Chicago Street Pizza. Then I went home to listen to some music and watch a very large chunk of the "Wizard of Oz". What an amazing year 1939 must have been to attend movies.

We met our friends Scott and Donna at the afghan grill in Plano, where the food was at its usual heavenly level, and the conversation was amusing and interesting. Then we came home and watched the DVD to "Martian Child", a very small movie which did not charm critics or audiences when it came out, but thoroughly charmed us.

Tomorrow the goal is to arise at sunrise.