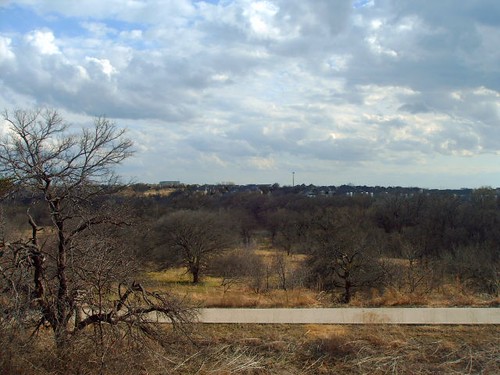 When I get a few minutes to spare at lunch, I like to head a few blocks from my office to the Duck Creek Greenbelt. Duck Creek is one of those "managed" creeks that in Summer is barely a trickle, but during a rainstorm it can be the principal bulwark against a flash flood. Day before yesterday I drove over a bridge over Duck Creek, and it resembled the Little Missouri River on a tear. On an August day, I'll see a heron or two perched in a few inches of water, hunting mosquito fish.

The Duck Creek Greenbelt is a city park that follows a long, narrow strip of riparian woodland. A sidewalk runs through the greenbelt, to permit easy walking in what would otherwsie be wet land a fair bit of the time. Yesterday I took a short stroll there, and watched cardinals in the bare trees. The flicker of red amid tree limbs is a pleasing thing to see. The water rushed strong in the culverts and creek.

After work, my wife had a meeting, so I stopped by the Spring Creek Trail in Richardson to take a walk This, too, features sidewalks near a creek, but here the vibe is more "deep woodland" than "strip of trail trhough a stripe of trees. I found myself chatting with a fellow who was walking two handsome mixed breed dogs. He told me that he adopted them at a local animal shelter. I told him about our shelter pal, and we both agreed that each of us would be most inclined to get any future dogs through adoption.

I told him about the dusk at this park in which I saw a huge barn owl. He told me that he saw a matched pair of owls often, and that he thought they came for a time, and then left at the end of March. I lingered after our talk to look for those owls. I did not see the owls,
but I did hear a distinct "Who! Who!". I love the sound of an owl in a woodland.