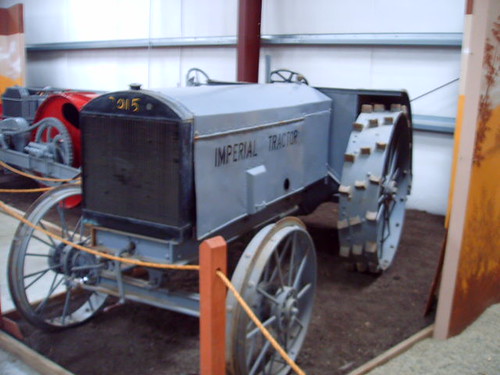 
On Thursday, after my business downtown was done, I drove toward the Sacramento airport, past fields of mustard plants in bloom. I had a conference call to take in a bit over an hour. I determined to drive past the airport, and take the next exit to find a lunch place.

The next exit turned out to be several miles up the freeway, in the town of Woodland. I tried a case in Woodland many years ago, at which time I acquired a really positive impression of the town. I stopped at a Quizmo's sandwich chain for my roast beef sandwich.
Then I saw a sign that said "Antique Tractor and Truck Museum, adorned with a suitable arrow.

I took my conference call in the museum parking lot, and then had time to take a brief tour of the museum. I was pleased that it featured in one building "antique tractors" and in another building "antique trucks". The vehicles had been lovingly restored by their owner. So often I fear that little museums "must" divert attention from the obvious they should be stating with faux subtle make-weight displays like "costumes of the tractor drovers" or "a typical diner along Highway 66". Instead, this museum served up the hot tractors with appropriate raisins and narrative brown sugar, and an endless array of pineapple-juice-sweet trucks. Granted, the Tonka display of toys may have been a bit "too too", but, on the other hand, the lifesize wooden model of a 1957 pick-up truck, done by a college art student as a homage to his father's truck, really provided robust aesthetic delight.

The museum curator gave me a dollar discount because I am a AAA member, and encouraged me to come back for the massive truck and tractor convention in June. Alas,I had but time to savor and shuttlebug for a fulfilling half an hour, before I shuffled to the airport.
On the way to the airport, I took pictures of blooming fields of mustard plants.

I had business in Austin Friday morning, so I changed my flight plans to go from Sacramento directly to Austin. This necessitated hopping on one plane that then made 3 stops. On the Phoenix to Austin leg, the woman behind me, a Los Angeles recording studio saleswoman originally from a small town near Winnipeg, talked at length about the upcoming SXSW festival she planned to attend, and the absurdities of Los Angeles life. During my Los Angeles sojourn, I always found many Canadian immigrants, who came to visit and never left.

The streets of Austin were awash with 30ish people hunting for the scene, but I was hunting for a lawyer's office. My business concluded, I flew back to Dallas and into further meetings.

Last night we sat down to watch the Jim Jarmusch/Bill Murray movie
I bought at a discount store recently for about the cost of a rental. I like Jim Jarmusch and I like Bill Murray, but the film put me to sleep within half an hour. Perhaps we can blame it on stressful work and mutliple-stop plane travel.

I worked at dawn with the spoken word sample of an early 20th Century anti-evolutionist, adding it to my odd remix of 4 second noise pieces. It fit very well, so I sent it off to my collaborator, invting him to read for me another time.

Today I drove to Lake Lavon. I originally intended to hike Trinity Trail, but it looked quite horse-i-fied and a bit muddy. I instead parked at nearby Brockdale Park. I walked in warm but windy weather past a grove of bare trees from which emanated red-wing blackbird "song", and past two very cute song sparrows, not singing.

I stopped by Bethany Lakes Park and took video of ducks eating bread from the water as toddlers threw it to them. I stopped by Allen's new and welcome Farmer's Market fruit and vegetable store for bananas and grapes.

I worked this afternoon on a new song with which I am pleased, and e mailed out a spoken word text for another reader. Then my wife and I had a dinner of chicken fajitas at San Miguel in McKinney.