Daffodils in the Snow 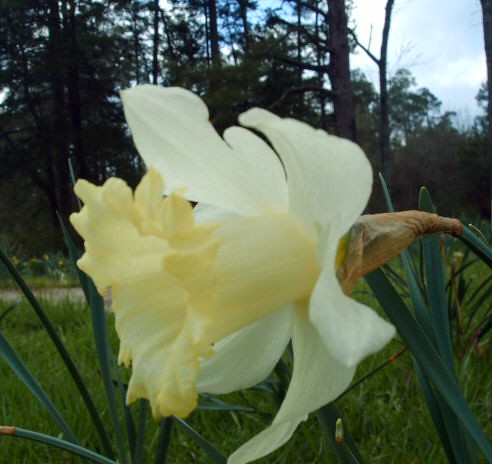 We woke up early Saturday and drove to Camden, Arkansas, for the Daffodil Festival. Although the highway was clear throughout, the ground had snow upon it from Hope, forty miles away, until we got to Camden.

We had a pleasant lunch with my father and his wife, before we went to the First Methodist Church to board a van to begin the Daffodil Garden Tour. First we toured the church quilt display, which was really interesting, and the little art show, which featured a painting of the house in which I lived during my latter high school years, and in which my father still lives.

The first stop, Oakland Cemetary, founded 1830, featured no daffodils but instead a number of people dressed in period costumes, who explained the lives of various internees at the graveyard. They helped give a human face to the stories of people buried there. Civil War re-enactors had been moved from river's edge to Oakland in light of the flood stage of the river. My wife pulled a lanyard to make a cannon explode, which was loud enough to wake the dead.

The second stop was the Daniel Garden, which features thousands upon thousands of daffodils, and an imaginative Japanese garden.
Mr. Daniel narrates a taped tram tour, which magically follows the exact progress of the tour. This, too, has a "wake the dead" sensation about it, as Mr. Daniel tragically died Christmas before last. We enjoyed hearing his narrative, and the admixture of chilled weather and blooming flowers proved an interesting juxtaposition.

A van then took us to the Dawson Daffodil Farm, a large, open field enclosed by chain link fences in which hundreds of varieties of daffofils grow. Although this garden is arguably less impressive than the many thousands of Daniel daffodils, its remote location, amid barking dogs and singing cardinal birds, enchants me.

We then rode to Oak Hill, a kind of latter-day manor, where daffodils and topiary dominated. We enjoyed the daffodil festival very much, including in particular the steak competition, in which the contestant's steaks are sold along with salad and potato for a fund-raiser. My steak was marinated just right.

Today we drove back, and I found to my relief that notwithstanding a trip to New Orleans, I had lost half a pound. Then I picked up the fellow who was matched with me in the Big Brothers program, and we headed to Arbor Hills Nature Preserve in Plano. We headed to the more remote sections of the park, where we saw rabbits, several field mice, hollies in berry, a matched pair of swimming mallard ducks, a male cardinal and the diffident female cardinal he wooed,
and foreboding clouds. 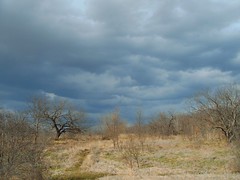 Then I finalized a submission for the upcoming "fight" at remixfight.org, with which I am very pleased. I had wanted to do a submission for next month's fight because the featured artist is Four Stones, who runs the ccmixter website and whose "La Vie Chill" is one of my favorite albums. I finally created something very workable,
using the provided drum sample, a melody which voices a sampled horn, and a short story about a fish, read in French.

It's always nice to see my dad and his wife. I had a full and entirely workable weekend--and managed to remember by 11 a.m. to change my watch.