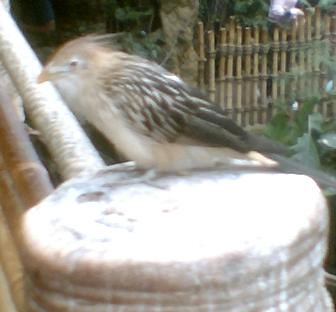 
Today a young friend and I went to the Dallas World Aquarium in downtown Dallas. I've visited this small, very well done proprietary aquarium many times, and each time it improves from the prior visit.

The main exhibition of the aquarium is not a fish tank, but a giant tribute to the Orinoco rainforest, which features numerous tropical birds which have a great deal of freedom within the multi-story building to fly around. We noticed that my friend had a South American Cuckoo perched less than a foot away beside him, and an aquarium employee identified him and told us he was kin to our local roadrunner. We saw and enjoyed the roseate spoonbill, the scarlet ibis, many toucans, the scarlet macaw, the whistling ducks, the flamingoes and numerous small warblers and miscellaneous colorful birds.

My recent trip to Costa Rica gave me a facility for bird identification of these particular birds that made me appear much more enlightened to my 11 year old friend than I actually am. We marveled at the crocodiles, the golden marmoset, and the manatees. Then we went to the aquarium part, and counted leafy sea dragons, stood within a chamber around which glided sharks and rays (the overhead passes were spectacular). The penguins cavorted in the chilly weather outside--perhaps they longed for Patagonia, but they seemed quite content.

The only really sour note was that they had a black panther pacing behind glass, occupying two stories of rather larger rooms. This was the only animal whose conditions of confinement stood out to me. I am not opposed to zoos, but I think he or she should be in a much larger habitat. i've seen large cats kept in smaller enclosures, but I want large cats kept in huge areas, if they must be kept at all.

After a fine lunch at the Maya Cafe (for me, tortilla soup and a salad) we drove back to Collin County and I dropped my friend off at his mother's house. Then my wife and I drove to the Heard natural science center to go for a nature walk. We saw cardinals and scores of robins, and heard birdsong. I feel an unwarranted pride when I can hear the red-winged blackbird's song, identify it based on a CD given by a kind neighbor, and then say to my wife when it flies past "Look! It WAS a red-winged blackbird!". We enjoyed our walk, and then we went to Christina's Mexican restaurant in McKinney, where I had pechuga con limon that was very tasty.

This was a good day, filled with birds and good company.