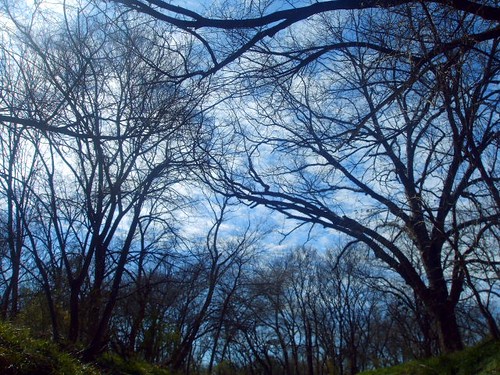 
I am aglow with partially fulfilled good intentions. One of my goals is to read more library books (and concomitantly buy fewer new ones at retail). Today my roast beef sandwich was accompanied by such a book on places to see birds in Texas. I was particularly pleased to read of nearby places, as well as a place in somewhat-near-if-distant Wichita Falls, in the "rolling plains country", which sounded divine. I scouted out the local Audobon society on the web, and found they meet a reasonable distance from my home on each month's fourth Tuesday. Their website led me to a fascinating new weblog by someone who writes about prairie preservation.

I have little desire to know each rook and all curlews by name, but I love watching birds for themselves. I am not a "birder" in that bird list sense, but someone who likes birds. The mockingbird in the shrub by a client's office today fascinated as much as I am sure a stray whooping crane might excite me. I'd like to learn to spot more birds and know more birdsong, but I am going to take this in measured paces. The second Saturday of each month has a Heard museum birdwatching walk, which I will check out one day.

I also am within inches of de-cluttering in a major way. I want to be a bit more Gandhi and a bit less antiques roadshow in my possession list. I have in mind a 200 book limit, and massive eBay sales, giveaways and even the dreaded discarding of things nobody but me would want. Unused technology, odd rhythm instruments,
stray porcelain bells. I wish to have more treasures in Heaven and hard drive and fewer in my spare room. Those who tout opium have never tried eau d'packrat.

Yesterday the warbler song inspired me, so I took a voice recorder out to try to capture some. When I capture some, I will upload it to the Freesound project, so that anyone may use the Creative Commons sample. Today, though, all I heard wree crows, and rushing water.

I was at Dollar General tonight, in search of raisin bran, when a customer at the front of the store made extra certain he was paying 8 cents he owed the store from a prior dealing of some sort. I like people who try hard to do the right thing. The clerk explained to her boss that the customer used to work at the Minyard's a defunct grocery in the same little shopping center. The customer explained he now works for Wal-Mart, which would, I surmise, translate into lower wages and lesser benefits. I think lately that libraries and community colleges need donations as much as anyone, because they are two ways to help level the economic/aesthetic playing field for folks who work in tough jobs like lower-tier retail.

I spoke to my father tonight, who assured me that tomorrow's eclipse of the moon is not a big deal to him, as he has seen so many before. I have seen a few such eclipses myself in my elliptical journey through this Cessna-like plane, but I never tire of them. I hope for clear skies and good eyes.

My father's wife's daughter, a woman a bit older than I am, is now recovering much better from a November stroke. I am pleased to hear this good news. Lately, I keep hearing of illness and rumours of illness.

CCmixter has a new feature in which one can note podcasts and films that use one's songs. I've had fun tracking the films and podcasts down. I like it when I find a video I had not seen before.

The site also has a feature which allows one to stream one's latest page of remixes. My music lately has veered from its more ambient/noise orientation into pleasant ittle chill melodies, often accompanied by spoken word tracks. Anyone interested can go here and click "stream page or stream gurdonark and hear the latest crop.
I am working on a number of original songs that I will release on another site in the coming months. This has been fun to create, although I have not lined up as many spoken word samples as I like, and may revert to instrumentals.

Kristin Hersh,has impressed me with her self-directed payment, Creative Commons recent approach to music (after years of being a leader of indie band Throwing Muses).. Her offer this weekend was extraordinary. She allowed each fan to pick 10 songs, play 50 dollars, and then she will record a girl-and-guitar personalized CD of the requested songs direct to tape for pressing onto a CD. This is a great idea--breaking down that ridiculous "super-hero-rockstar" gap between audience and performer one more time.

Here in Texas, people are becoming aware of tihs primary season.
I will vote soon. I am eager for a Democrat to win the general election, and end this current morass.

In the meantime, I wish for herons in flight, and the song of a baltimore oriole.