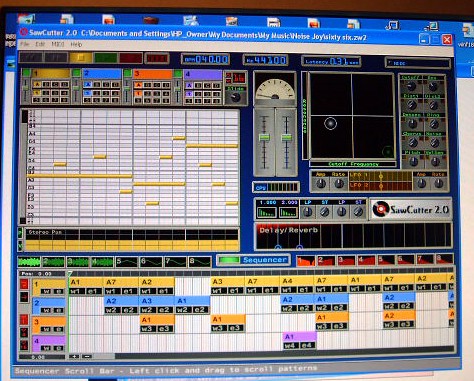 With inexpensive shareware I "sing" to the world., originally uploaded by gurdonark.


Today the weather was sunny but brisk. After a Chinese buffet lunch in which I assiduously ate things that "work for me" like kim chee and avoided things less "on the plan" like fried things, I headed over to a local park. This park is a greenbelt park a few streets down from my office. It has sidewalks through woods.

When I arrived at the park, a flock of seagulls was making loops and spins over a tiny pond, on which ducks were swimming more sedately. I walked for a few moments, past a culvert bridge under which water flowed so strongly as to be almost torrential.

My "thing" lately is noticing birds. Birdsong erupted from two tall, bare trees, and I kept looking up to see what was singing it. Was that a
cardinal? Was it something else?

Eventually, I saw a small yellow bird, who was emitting a large, inspiring song. I made a mental note of the look and the sound of the bird.

During my afternoon drive back to Collin County, I pulled out my trusty birdsong CD, one of the very coolest gifts I have ever gotten, given by an across-the-street neighbor. I listened assiduously to each of the 37 backyard birds which was on the CD. Tonight I checked the three "usual suspects" based on the sound against the
lineup of bird pictures we have by our window. I have isolated an "avian of interest" called the yellow warbler. The bird card said he usually doesn't come to Spring, but I suspect he is an early migrant.

I successfully got matched with a little brother in the Big Brothers program, and we met. I don't think the details are appropriate to
weblog, other than to say that I am pleased with the fellow, whose interests align with my own. On a more somber note, the match administrative fellow mentioned that while in our northern suburb county the matches of Big Brothers to Little Brothers runs roughly apace, Dallas County to the south has little guys who might wait one to two years to get assigned a Big Brother. This made me a bit sad, somehow. It also brought out my Andy Hardy streak, because my first reaction was to make a Youtube to encourage people to volunteer.

I continue to work on writing songs with my little synthesizer. I am using the old one more than the new one right now. I have finished a number of new songs, but want to do a goodish bit more while I am doing things.