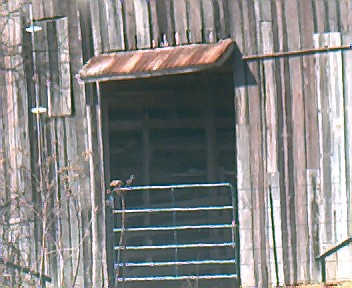 Today I rose early and drove seventy minutes south to Ennis, Texas, to meet my friend G. for a hike.

The weather was crisp when we arrived. I had read of a new hiking trail at a park called Bluebonnet Park, but when we arrived at that park around 8:45 a.m., it was closed.

We got directions over to a hiking trail in the Waxahachie part of Bardwell Lake, and drove there. On the way to the lake, we saw two roadrunners.

The hiking trail turned out to be very nice. It was in an open space, with trees nearby. The bare branches of the trees were filled with songbirds, and in particular male cardinals. We saw a huge red-tailed hawk which sat on a limb looking both watchful and particularly pleased with itself.

We went to the small history museum, in an old train stop restaurant.
It was very nicely done in a completely renovated building. We watched an eight minute film abuot how Ennis was founded as a railroad stop Its history included visits from topical robbers and bandits such as Cole Younger and Sam Bass. I like that Ennis has a huge bluebonnet festival each Spring.

G.. is thinking about moving to Ennis, so we went to check out an apartment complex. It as a luxurious-looking place which seemed much too nice for the area. When we met the leasing manager, though, we found that it was in fact subsidized housing. If one made over x dollars (roughly 26K/year), one was ineligible to live there. We
found that what we thought was untold luxury was in fact public housing. I wish all public housing looked that good--it gave Section 8 a good name.

We visited another apartment complex, and had Chinese buffet at a place with steamed brocolli and fresh pineapple. We parted ways. I stopped by th Wal Mart to get a new watch. I do not wear "good" watches, but instead wear inexpensive watches. My current watch had outlived its usefiulness, as it seemed to want to turn into a stopwatch or to require resetting too often. I wanted a new watch wth only two features--analog hands and a night light. The five dollar watches involved instead a plethora of controls and notions. Finally, by paying more money, I could get a Timex that could do much less.
Sometimes it takes a premium to get the great liberation of less. I chose not to go to the polkafest in this charming town with a strong Czech heritage, nor to the all-afternoon gospel sing at the chruch with the roadside "Repent!" signs.

On the way home, I stopped at the Bath House Cultural Center at Dallas' White Rock Lake. I saw the photo exhibition "Amateur's Birdwatcher's Journal" by a fellow named Carrington. The exhibition featured tons of bird shots from the last part of 2007, all taken at White Rock Lake. The heron shots were delightful. My own effort to snap a ring-billed gull proved less revelatory.

We had a nice supper at Shady Oak Barbecue with my brother and his wife. My nephew just turned 16 recently, and has begun to drive.
Time passes so quickly.