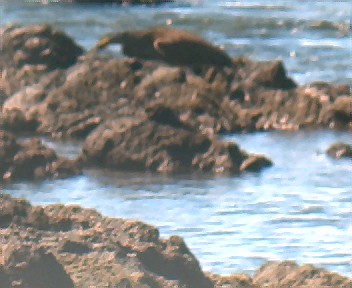 all at sea, originally uploaded by gurdonark.

I like those straightforward tags, like the wisdom/desire/mirror/dust comparison. Lately I find that I prefer to remove my glasses to read--the bifocals work reasonably well, but not as well as my presbyopic eyes. I am still near-sighted and astigmatic when it comes to things far away.

Perhaps this explains in part why I like my 3/10th megapixel Mikona camera as well as I like my 5 mp "better" camera. The colors on the Mikona haze a bit, adding a truth which is not the light and haze of plein air, but instead the "through a glass darkly" haze or the "act of observation alters irretrievably the thing observed haze".

Tonight the national public radio ran an article which gently assailed the presidential candidate Mr. Huckabee. Mr. Huckabee's speeches are laced with sparkling but rather commonplace Biblical expressions, as in a recent "smooth pebble" iinvoication of David and Goliath and a "loaves and fishes" miracle reference. The NPR folks spoke of this argot as if it were of the highest arcanity, citing "people in the street" to show that even routine religious references are unknown by most folks. Needless to say, they did not ask, for example, of which state Mr. Romney had been Governor, or just what the McCain-Finegold Act sought to reform, although these questions, too, would have been met with blank stares.

I really don't take as much discomfort as NPR did in the uninvolvement of the ordinary soul in things that involve Mr. Huckabee. It's so hard to distinctly see anything beyond one's immediate niche.

I have one of those backyard bird identification charts by our back window, for use in trying to identify the birds at the feeder. I never understand why the painted bunting and the indigo bunting are never at our feeder, nor even the scarlet tanager, while the mourning dove and the house sparrow make frequent guest appearances. The birds line up on the fence in neat little lines, waiting their turn at the feeder. Unless they are of the most common types, their species are to me indistinct.

People talk of second sights or third sights, but I am more a fan of "hobbit magic"--the ability to see what is there before one. I like that I know most of our local larger butterflies, and a modest number of the common birds (and, thanks to a kind gift of a neighbor, some of their songs).. Yet I could see advantages to being able to see, for example, the future--and also the advantages of seeing indigo buntings at the feeder.

At the library last Saturday, I read a wildlife magazine about motion detecting digital cameras Imagine leaving one's camera open to capture of coyote, deer, and shy bird experiences. Perhaps, though, there is a kind of comforting mental photograph in knowing that we don't see all (or even much) of what is right before us--and there is so much so far away we shall never see it.