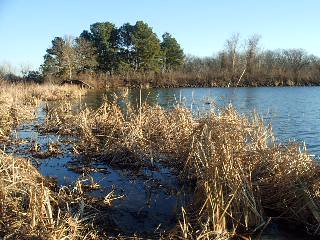 Suddenly, you look up at a tree you've seen a half-dozen times already. It's a bare oak,which you believe to be a post oak, if your memory of what you learned in seventh grade shop class in high school serves you in good stead.

That's been an empty tree branch for the past hour. Gnarled, wonderful bare branch tendrils waving off towards the skies of divergent, alternative universes.

But then you notice the branch is no longer empty.

He's huge, and you wonder, for a moment, if he is a different kind of heron than a great blue heron. He's dark like January, except for the gray-death beauty of the part just around his head. He's standing on the highest branch on the large, leafless oak tree. You're profiling him as he stares out at water on which the fading afternoon sunlight. It's as if he's gauging something you can't measure, and thinking thoughts that you're not able to think.

You pull to your eyes the giant 15 x 70 Celestron binoculars you're carrying. Skymaster, they say, skymaster. You look at the skymaster as he stands and stares out. You're not quite there with him, but you're with him in your own way, both of you still, both of you staring.

When you reach to pull a camera up,
he begins to fly away, in long graceful, loping movements, skymaster, skymaster. You're not to capture this one, other than in memory

You see his darkness resolve into gray-blue, as if eyes unclouded, and plunged towards the fading sunlight on the water.