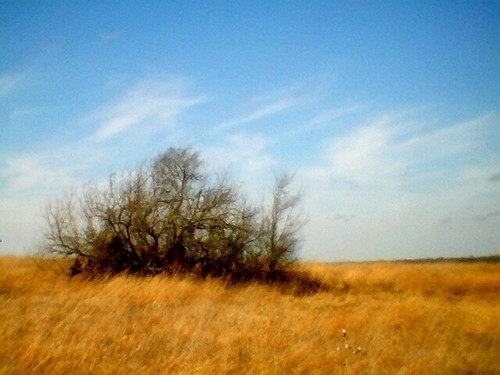 
Today I drove to northeastern Collin County to my favorite local park, the Park Hill Prairie. This patch of original blackland prairie sits on an obscure country road off an obscure farm to market highway near the tiny town of Merit, Texas.

The weather was windy but very warm, in the 70s. Although I often fish in two park ponds, today I only brought cameras and a sound recorder. I began to walk the prairie trail. As I walked the trail, larks rose on either side of me and took to flight at irregular intervals. It was a lovely effect which persisted until the time I trained my video camera to capture it, and then ended until my camera was safely returned to its case.

I heard a giant hawk calling "Scree! Scree!" as it hovered high overhead. I trained my supersonic 20 x 70 binoculars upon it, but
could not make out if it might possibly be a young golden eagle rather than an old hawk, and thus opt for the latter.

The show-stopper was to see an adult butterfly on this day a week after a hard freeze.

I then went into the town of Blue Ridge, population 780, where I ate perhaps the least-distinguished barbecue sandwich I have ever eaten. I noticed the small town grocery market had closed. I thought to myself how the rising price of fuel will eventually create small local markets once more, as they existed in the youngest part of my childhood.

I drove north, heading toward Denison, as I had read about a vintage sheet music store in a tourist throwaway a few weeks ago. I passed through Bells, and passed the impressive-looking small building of the International Boer Goats Association. I wished it had been open because I, for one, believe, without any real acquaintance with the boer goat question, that associations for boer goats are something one should tour early and often. I am impressed that the International Association is just outside Bells, Texas, population 1200 or so.

Grayson County, Texas is lovely and known to tourists only by the large-ish Lake Texoma. Denison is a very traditional north Texas town with an old-fashioned downtown. There must have been ten large antique stores, a bead shop, a burger cafe, two art galleries, and two impressive bookstores. I shopped in one of the bookstores, called Epiphanies, where the woman behind the counter, perhaps college-age, wore an outfit pleasingly lifted from a communist-era Eastern European costume department for a filmed remake of the story of "Ali Baba and the 40 thieves", re-titled "Villanous Capitalists throughout History". I told her I was seeking books on music and music theory, so she led me back to an older fellow--perhaps a father or other relative--who had the look of a scrivener or a book vendor and the beard of a ZZ Top. He was the sort of intellectual fellow who can hand-publish books of poetry using sweet potatoes and india ink, and probably talk to you about Spinoza and other brainy coves while he hoes organic seedless grapes in a thrip-friendly garden. To be a bit less fippant, he was a really nice guy with a great bookstore. He showed me shelves of reasonably priced books about music. I got a guide to the classical composers and a 1905 music theory book about the theory of harmony.

I am interested in pre-1923 sheet music, because in this country that is the year which is guaranteed to be in the public domain. I hoped to find some of the Texas waltzes that were created in this region, during the days when nearby Sherman had a music conservatory.
I instead found something created elsewhere, for which I was charged a dollar. The owner told me that the town has a local musicale each month, and took my address so that I might be sent notice of the February performance.

I also stopped in a pawn shop where the fellows were all really nice. I did not buy anything there, but it was note-worthy to me, because I do not recall ever pawn-shopping before. I have that ambivalence about pawn shops that I have about a lot of things, because they serve a need and yet serve it, sometimes, on somewhat harsh terms. Still, had I seen something I wanted, I might have bought it, because even the asking prices were sedately low.

The vintage sheet music shop, it turned out, was in nearby Sherman, so I phoned for directions and drove on down. The Memory Music Shop featured tons of vintage LPs, and a huge amount of vintage sheet music, on sale for a dollar a song. I bought three pieces. The owner mentioned that he had tons more at home, not on display for want of demand. I have the idea that I could simultaneously buy a bunch, keep a few, sell most on eBay, give a few to friends, and donate the eBay proceeds to an animal adoption group. I have a nearly-formed 2008 resolution that I want to do crafts or used good sales to benefit animal adoption centers.

I drove the scant forty minutes home, where my wife and I met our friends Scott and Donna at Javier's in Dallas, the wonderful Mexico-city style Mexican restaurant. I had the Shrimp Guaymas. We had a our interests, all sorts of fascinating work and personal news for our friends, and our concern, as Democrats all, to see who will be elected in the next cycle.

We made an early evening of it, and my wife and I watched a public television biography of Lucille Ball.

I needed a recharge day like today--and my needs were met.