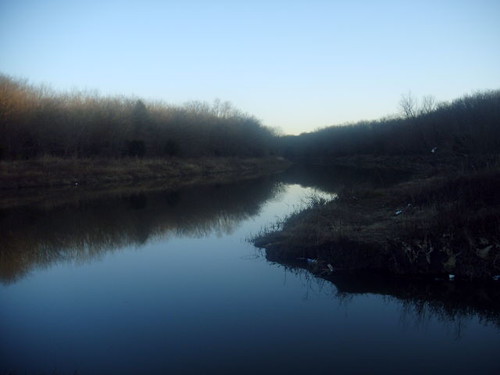 now we see through a glass darkly, originally uploaded by gurdonark.

2. New discovery, short story division: Bound Off, a free narrative short story podcast, featuring original short stories. I listened to two strong stories this evening as I gazed out at Lake Lavon Dam. It's run by two women from Iowa, one of whose husband, Mark Rushton, I have heard of before in this "small world after all" because he, like me, is a big Bill Nelson fan but he, unlike me, makes good music, too.

3. New disovery, weight watchers division: I managed to hold my holiday weight gain to 6/10ths of a pound. This is very good news, as I worried that I had over-indulged.

4. New discovery, New Year's division: I want to make resolutions this year, after a brief-ish hiatus. My first one? i want to lose not only the 5 pounds to get me back to my "goal" weight of 210, but also 10 more to get me to an appealing 200 pounds.

5. New discovery, personal flaw division: No matter how many pairs of suitable binoculars I own, I cannot resist a ten dollar sale on new Vivitar 10 x. 50 binoculars. I will use them on a moon view soon, and that will make it all right somehow.

6. New discovery, avian division: I saw dozens upon dozens of migrating cormorants, flying with military precision in v formation. I did not know they migrate that way. It was lovely! I'd show you a picture, but the camera said "Low Battery!" and then they were gone.

7. New discovery, football division: given a choice between the Dallas Cowboys on the radio and a nice walk by a lake, I'll take the latter every time.

8. New discovery, exciting Danish film division. Copenhagen video artist Sam Rensiew has now made over a dozen films using my music and posted them at Blip TV. I like that Sam does not slavishly just slap my songs on, but actually remixes and re-mashes them, wisely realizing that they are there ot be sampled, used, morphed and mangled. I remember once a charming woman who made beautiful a capellas a couple of years back for people to remix. She got her feelings hurt because I mentioned to her I might place her vocals into a synthesizer and turn them into instrumentals through synth magic. Her explanation was that she took her vocals very seriously and thus she could not bear to think of that. I am the opposite. I do not take myself very seriously, but to the extent I have a serious bone in my body about music, it is that the only serious way to listen to it or remix it is to take it and make it your own. I have let it go. It's free now. Fly it to the moon.

9. New discovery, roots revisited division--My wife has discovered a fancy for the Derailers. I think they're fun.

10. New discovery, New Year's division--after a hard work day on Monday, I get another day off.