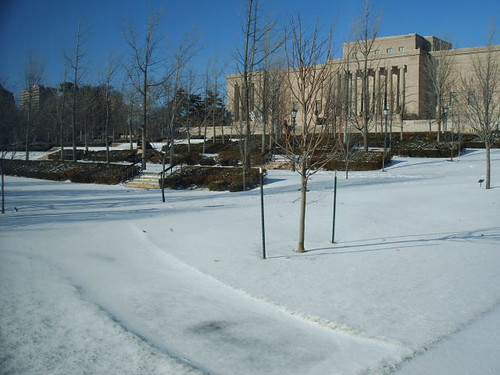 The Nelson in December, originally uploaded by gurdonark.

When our flight left Dallas on Saturday morning, the temperature was 60 degrees. When we landed in Kansas City ninety minutes later, a snowstorm was in progress. I have not gotten to experience all that many snowy Christmas times, as our Arkansas Christmases might be "white" only every seven years or so, and Dallas is snowy less often still.

We enjoyed the sights and sounds of this particular December--the planet Mars and the Moon in close proximiity, hawks hovering and standing as they hunted, the sounds of Canadian geese overhead.

We spent a great deal of quality time with my wife's family, and we had an enchanting Sunday afternoon at the new addition to the Nelson-Atkins museum. One festive meal featured tenderloin, while another meal featured ham--I cannot recall a recent holiday in which turkey was not the main attraction.

On Christmas Eve we called my father, who not only was resting comfortably, but who also had had the small steak traditrional to our family's Christmas Eve celebration. Atlhough my family has more English and Scots forbears than German, the German strain handed down the celebration of Christmas on its eve. For me, Christmas is t-bone steak and the opening of gifts with wild and disordered abandon on the night before Christmas. This particular Christmas Eve I watched "It's a Wonderful Life", as well as the night sky. When I crept down just after midnight, to see the Moon and Mars in their closest conjunction, I spotted a rabbit standing just outside the door, in the darkness. He was a quiet celebrant, with me, of the glory of cold, clear nights and over-arching skies.

I enjoyed seeing my 2 year old niece, who has matered a modest vocabulary of words, a large vocabulary of word comprehension and numerous impressive animal sounds. I also enjoyed the grown-ups, as my wife's family are kind and interesting people.

We flew back this morning, landing in the rain. I got a little work done tihs afternoon, and look forward to two more days of worthy effort this week.