if this were California 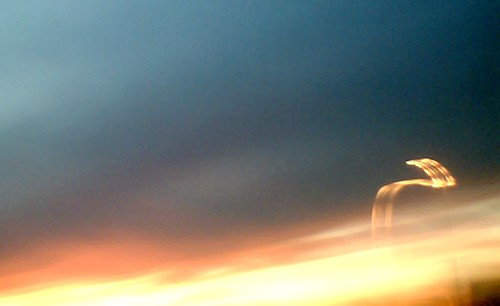 
Last night we drove up to McKinney, which has a quaint downtown very Texan-looking square with an old courthouse. This square usually provokes from me phrases like "If there were California".

"If this were California" is my catchphrase to describe how in that golden state anything with any remote charm or appeal is promoted as a tourist destination--sometimes with surprising success. Thus, when I am on Pinnacle Mountain outside of Little Rock, a really charming very small mountain with an easy hiking trali ascending it,
"if this were California" means that "on a foggy weekday morning like today, this place would be over-run". The entire state-let of east Texas, including the rose capital of Tyler, would have "if this were California", would draw millions of well-to-do refugees from the city, who would talk about joys of greeting their neighbors (but never actually greet any), ensure the local supermarket stocked the latest designer organics, and insist that zoning laws be put into place to keep people from California from moving in.

In the vein "if there were California", the downtown square in McKinney would be a small-town southern-fried Pasadena Old Town, with the sauce on the chicken fried steak served on the side.
Over the years, I've been amazed at how this entirely charming area of antique and other gracious stores, situated on a historic town square across the street from an old courthouse, does not pack them in. Yet for years, it doesn't. Stores in big boxes with names like Costco and Sam's and Kohl's pack them in. It's true that the lunch place in McKinney's downtown, where you stand in a line for comfort food that you are glad you stood for (we all must stand for something) is a hit, but so many charming places miss.

But last night it was as if this were California. A new high-falutin' chop house, complete with a crowded lounge with mildly Austin-folkie-meets-torch-singing stylings from the young woman at the mike in the curious Grove Lounge dress, has sprung up where once used quilts beat a dead horse. We went into the restaurant, only to find, just as if we were in Los Angeles, that for those without reservations the next seating would be 70 minutes away.

I think that livejournals are a wonderful place to share all one's inner inadequacies, due to their public nature by which one can inflict upon oneself humiliations only the elementary school playground can "top". Thus, I will confess that the restaurant has not yet been opened that I will wait 70 minuites to attend, and if it did, it would not have the words "chop" or "house" in its name.

One of my regional provincialisms is that when I hear the words "chop" and "house" in a restaurant title, I think of places in Detroit or Chicago in which waiters assure me I should find the experience really moving because they have spread sawdust on the floor (which gives me new respect for my Great Aunt Blanche, if Blanche is the right one, whose feed store must have been authentic indeed). "Chop House" to me means the serving of chops, which are, if I recall correctly, things or which inexpert butchers made curious swath-like cuts at protein sources and then off-loaded them inexpensively to places with sawdust on the floor.

Yet "if this were California", this somewhat "stuck-up" chop house would be right at home. Similarly, across the street was a tapas bar.
I must tell you that in my part of Texas we have many bbq stands and more than a few Tex/Mex restaurants but we are short on tapas bars.
Yet now, just like California, McKinney has a tapas bar. I like tapas, which are, to me, like dim sum in which someone got lost in the Pyrenees, but we gave it a miss. But I was amazed--we were suddenly in a sea of new restaurants.

Then we came upon yet another new place, which was, of all things, a Middle-Eastern/Scandinavian restaurant. Think herring and gyros if you will. This place was amazing. It was stylish, it was non-stuffy, and I had a chicken done simply in reasonably small, California-friendly portions while my wife had a sliced lamb that was heavenly.
The light, jazzy music and the perfect service completely worked to make for a pleasant experience. It was as if we were in California, but nobody was talking real estate deals on their cell phones.

I love Texas and I love California. I miss looking out from my back yard at the Verdugo Mountains encased in Pacific fog haze, and I miss walking on the Pines Trail in the Angeles National Forest amidst the sound of myriad birds singing in the scrub oaks and scrub junipers.

When I lived in California, I pined for a decent bit of barbecue and for a biking trail flat enough to be a pleasure to ride without my having to drive to the desert. Texas, California, Calitex, Texifornia--I love them both. I miss Los Angeles weather, and the easy-going eccentricity of Los Angeles life. I love California people and California places, just as I love Texas.

When I am in Los Angeles, I might say "if this were Texas, that waiter might call me "sir" instead of "guy" or "fella", but I'd also point out that "if this were Texas, people would be much less assiduous about their fitness and physical health than in California. If Los Angeles were Texas, they'd have privatized the San Diego Freeway into a toll road,
but at least Los Angeles' "this town's gotta make me a star, so I'll play whatever I think will be the next ephemeral trend" brand of music would be replaced by Austin's "there's a kind of something in the air here that makes one want to pick up an acoustic gutar and sing about failed relationships" easy-going musical heartbreak.

But last night I realized that Texas and California are twains that can sometimes meet, and the result can mean chops, tapas, and
herring-themed gyros, all set in a town square from a western movie circa 1880.