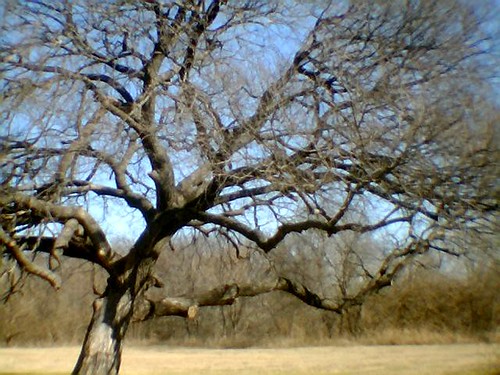 I am never sure about the seasons, other than that in inland southern Califonria we had roughly three, and in north Texas we have roughly four, three of which occur recurrently throughout the day in the early Spring and late Autumn.

I believe that today is something like the nearly shortest day of the year, which rings as if I were saying "three quarters pregnant", but I'm not, being unschooled in any matters pregnant other than pregnant pauses.

I think the song "If I had a hammer, I'd hammer in the mroning" would be fun if the word "solstice" were substituted for "hammer".

I am going to write a poem about Karl Guthe Jansky, the man from Oklahoma who discovered the potential for radio telescopy, but never got to fully develop his discovery and died at 44.

I am going to relax tonight. My father got out of the ICU tonight, and moved into the regular precincts of the hospital. An on-line friend offered to send me an entire CD of mp3s of his music, of which I am a big fan. The Calendar Songs project reached its first culmination--and it's fun to see. I believe in people who do as well as dream--and it's really doing something to post songs on a website so that people will remix them into gems. It's almost as much fun as I imagine radio telescopy would have been, if I had been Karl Guthe Janky, and lhad world enough--and time.

I am grateful for every moment I have--and every fact I read--and every
kindess I encounter.