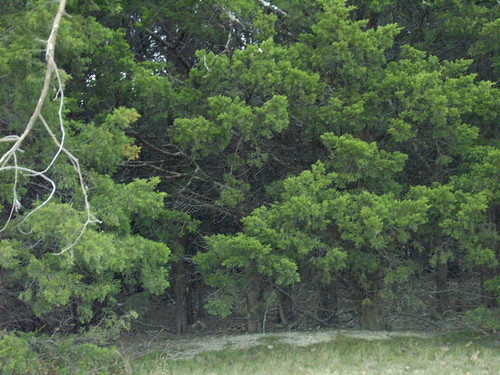 
We went last night to my wife's place of work so that she could drop off her "toys for tots" type package in the appropriate receptacle. The corporate building where her company is located, about fifteen minutes from our home, had a huge holiday tree in the lobby, as well as year-round live trees just behind the building. She set the giant sack with the packages in the box in the lobby,and we headed off to dinner.

In our family, I am the one who is less detail-oriented, while my wife tends to focus on all the little things. It was therefore a bit of a surprise when we ran out of gasoline in her car just as we reached our little suburb. Rather than walk a fair bit in the rain/below 40 weather, we sat in the car and talked and waited for AAA. The fellow came with the fuel, and then we dined at Souper Salad on soup, and, well, salad.

I was pleased that we still got to see Project Runway. I like reality shows when they have a "talent show" component. I am in general uninterested in the sniping and banter at the sewing machines. I like seeing the effort to create outfits in no time, and the way the results hit the runway. I'm always intrigued how in the early rounds a few contestants can completely drop the ball. I'd imagine that if one were auditioning to be on a show such as Project Runway, for example, that one would be experienced in creating a men's outfit, even if this is a "different" specialty, somehow, than
making a dress. Yet on the show, the idea of being assigned to make one proved this year some strange and subtle alien experience to several of the contestants. I did rather like the contestant from Oklahoma a season or two ago who always made very outre' -retro costume-y outfits that always got denigrated as "prom dresses". I always "rooted for" him, even when he made "prom-dress couture", because it was my belief that he would go back to Tulsa (or wherever) and make his fortune in "I was on Project Runway" prom wear. I rather like Heidi Klum, though I cannot put my finger on quite why I say that.

I do not like the kind of reality shows in which people get thrown out of houses or marooned and de-marooned on islands, but any show with an element of Ted Mack's Amateur Hour or any other talent show can be fun (on the other hand, anything remotely like the old Gong Show will send me to the channel-button pronto, though I used to watch the Gong Show).

Today I must drive into Garland very early, as it is the annual Garland Prayer Breakfast. This function features breakfast and prayers, but
it really ends up being an event in which local kids sing a lot. It's a pleasant enough thing, except for the "getting there by 7:45 a.m." part.

Tonight we fly to Little Rock. My father, who is 74 but seems younger, is having a medical procedure done Friday and we will sit in a hospital waiting room while it is done. I have to go check the weather momentarily to see how cold it will be up there. I am very fond of Little Rock, where I went to law school (and always meant, vaguely, to settle down in, but never did). I hope we get a moment to have dinner at my favorite restaurant (The Terrace) or to hike at my favorite park (Pinnacle Mountain). I suspect, though, we'll be in sitting around mode.

i was reading the weblog by the Brooklyn school teacher whose eighth grade class just won the national eighth grade championship during a tournament here in Texas. Her strongest player is about my strength, but when I was in eighth grade I was only a fraction of my current strength. Meanwhile, the e-mail each day brings me the results of a grandmaster tournament being played at the Dallas Chess Club this week. Ray Robson, an American player, has clinched his final International Master "norm", and has an outside chance of attaining his first "norm" for the grandmaster title.

It's fun to be "in the know" on how to read chess move scoresheets and to understand a bit of chess theory. Yet there's a note of longing, too, that my own play seems to consistently slightly degrade. My overall rating has inched down for a decade. My current play at on-line postal chess at the International Correspondence Chess Federation can be charitably called "unimpressive", as I only win games that are more or less wretchedly played by my opponents,
sometimes hold draws in reasonably played games, and lose any game in which the other side shows any skill at all.

I remember when I was rated 1797, just below being an "A" player, and my results against experts and other players around my strength showed me that if I wished to really work at the game, I could improve my strength and perhaps even improve into the expert rankings. I instead chose to give up chess for some years as my law practice began. I took it up again later, and did move up a few points into the "A" rankings for a year or so. In general,though, I chose the road away from taking chess very seriously. Having made this choice, I wish I could say I feel no regrets that I am no longer very good. But actually I feel a burn of regret after all. It's still fun, though, to glance through a game from the local tournament and be able to say "they're sure playing a lot of Scandinavian Defenses this time".

I think it was in Greek mythology that the departed drink from the River Lethe, which causes folks to forget what went before. I have no real desire to forget very much, but I understand why a mythology could posit the idea of letting regret and memory go.

I have a busy day today, as I clear the decks to be out tomorrow.
I'm eager to get things done, get to Love Field, and go see Little rock once more.