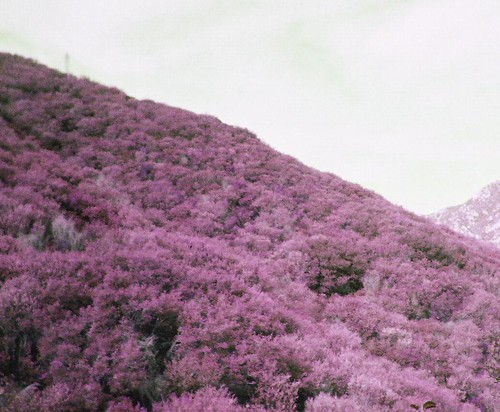 I like the way that traffic spreads thinner during Thanksgiving week, like mayonaisse on a cake-frosting-spreader, after being gingerly balanced pre-spread after the jar lacks enough to make a proper bologna sandwich.

The commute to work acquires a kind of speedy leisure, as if everything for which thanks should be offered springs from the leisure of others liberated from work so as to clear the roads, which, one week a year, must roll.

Today I could always say "and it's good to hear that only you and I are working, while everyone else has the sense to take the day off", with the knowing camaraderie of lawyers immersed in law, for which we are all advocates of gratitude.

Tonight Moo cards arrived. Moo cards are these odd-shaped cards which a company called Moo creates from one's Flickr photos. I received a gift of a custom ten for doing something along the line of filling out a poll or sending an e-mail. I must admit that the cards I ordered, ten in number, came out breathtakingly good. It makes me want to do new photos of the ideal size for moo-fication and order thousands upon thousands of such cards--or maybe 10.

I am getting to the age now when I sometimes have telephone conversations which begin "remember, we spoke years and years ago" or in-person talks like "I could not remember if we knew each other, but I knew when I saw you I'd know, and we do" Today's post is sponsored by the words "comfort" and "bane".

I won a chess game among my on-line postal games from a fellow who kept playing despite being badly behind until I administered checkmate. I lose more than I win at postal chess, so it was nice to notch a direct if not eloquent checkmate.

I spoke into a voice mail for a CBC thing today. Let's see if it gets broadcast. I am, near as I can tell, John Q. Public.

Two more days before the holiday, and I plan to work them as if they were 2 1/2 more days.