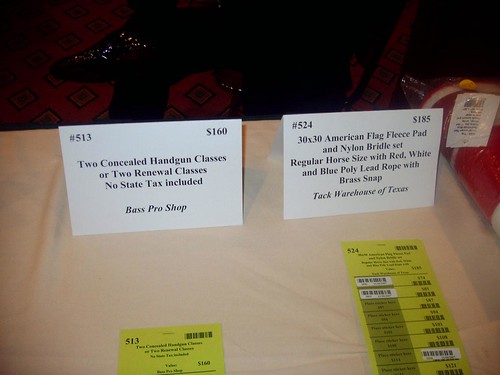 "They're free! All the margaritas are free"--woman drawliing into a cell phone on a late Saturday night.

Thirty one years ago a set of folks who drank margaritas, that south-of-the-border Jaliscan tequila drink much beloved in Dallas, set out to do something new. They would found a charity to throw a big fancy-dress ball and collect toys for under-privileged kids.

The Margarita Ball was born.

A kind lawyer and his wife who practice down the road from me asked my wife and I. The website for the event required formal wear. Men were to be in tuxedo, although a dark suit was acceptable, while women were, in Dallas fashion, expressly encouraged to wear sequins with either full or cocktail formal attire. The website went so far as to say that one cannot be overdressed for the Margarita Ball.

Now that I have lost weight, the tuxedo I bought years ago for a different function once more fits. My wife had the formal attiire with modest sequins which serves its due function in formal and semi-formal functions. Our usual semi-formal function is the Garland Bar holiday party, but this event was a more posh event.

We drove hours early to the Adam's Mark Hotel, as our hosts had rented a suite there (most attendees stayed the night, to avoid driving while margarita-fried, but I was not going to drink, so we did not need to do so). We gathered in the small suite with they and the other invitees, and dined on cold cuts sandwiched in croissant.
We enjoyed the kindness of the other people there. One guest was one of the 118 Texas Rangers, the elite police force for serious crimes. He was a great guy, and I mean no disrespect at all when I say it was like talking to chicken-fried CSI in action. I admire police and firepeople, and applaud my local dollar store, which sells figurines of them for a dollar and not just soldiers and cowboys.

Each guest brings a toy for Christmas Charity to the event. At the KB Toy outlet store, I scored two Razor scooters for 29 dollars each.
We took our invitations to the party, along with our toys. Later in the evening, we saw the following mountain of toys: 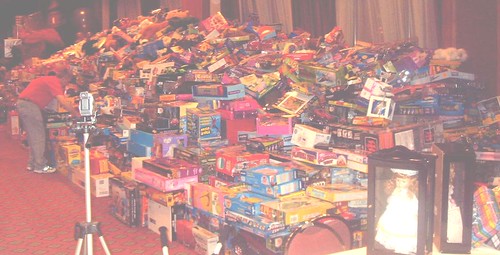 This is a fraction of the total toy haul, as guests were streaming in with more toys when we left the party, and many people donated 25 dollars in lieu of a toy. People were uniformly nice, and nobody was a spoilsport.

I talked about places I want to see in Costa Rica, and places I want to see in Texas, with the nice husband of our former "of counsel", who had also been a guest of our hosts. We walked by a silent auction, which featured Picasso prints, Dallas Cowboys football memorabilia, trips to a Shreveport casino, scads of original art by famous artists, golf outings, and other luxury items suited to a charity auction.

The attendees were thousands in number, as advertised. We saw high fashion gowns. We saw outrageous gowns. We saw plunges and edifices and incredible beauty and wild absurdity. In classic Dallas fashion, no exuberance or hubris was spared. We were delighted with the people watching, and at just how many truly gorgeous people were in attendance.

I am not at all a socialite by inclination. I tend over to the "secretly thinks he's poor white trash" side of the ledger. Yet I loved all these aspiring social people, dating, dancing, meeting, seeking, smiling, and almost never frowning.

We did many of the things one does. We played the charity slot machines. I got many triple fruits, but no triple 777s. We listened to the amazing DJ from LA, who did some remixing mash-ups on the fly that really intrigued. We listened to the soul covers band. We noted with amusement that the only song that truly got almost everyone up to dance was "sweet home alabama". We visited and rapidly exited the jazz floor, because smokiing was permitted there and it felt like being in a house fire.

We got our picture taken by a professional photographer, just after 8 tipsy people who knocked over the huge background curtain. We noted the silent auction items for "concealed handgun lessons" or "an American flag nylon horse bridle". Mostly, though, we drowned ourselves in the sights and sounds of a social miileu not at all our own. I rather like the mixture of society and social climbers, though, as there is no joy so great as the joy of someone who may not yet be anyone, but who gets to party as formally as if they were.

There were oceans of free margaritas in punch and champagne style bowls. There was pervasive evidence of the doubly definitive extensive talents of plastic surgeons (indeed, so much so that even my customary obliviousness was pierced). The entire party sometimes seemed as if it were from a movie about an archetypal nouveau-riche Dallas from the most fun movie set on which one ever made union scale for the sheer artistry of the project.

I wanted to meet everyone and shake their hands and tell them they were really cool in the best eccentric way. In fact, though, I quietly roamed the three floors of party and smiled. My wife sometimes stopped to compliment a dress. I loved it when she stopped one of those introverted women who is gorgeous but gives off the impression of not realizing it. I loved the way that woman's face spontaneously lit up when my wife complimented her understated and stunning dress.

Tiaras, marine mohawks, military uniforms, backless, strapless, shameless, peerless. There were no cotillons or bowing, but a great deal of soul and techno music, sprinkled in with rock and country.

I drank nothing at the Margarita Ball. We danced not a single dance, and were home by eleven thirty. Yet I am drunk with the desire for an invitation to next year's party, to live among the tequila-seekers once more..