from westwood to big tex 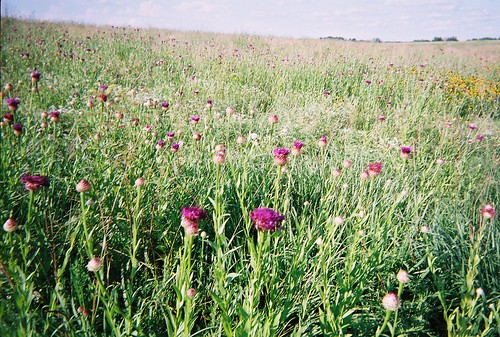 Thistle blooms in the prairie, originally uploaded by gurdonark.

I began my morning with a cinnamon roll at the shop down the street from my office. The shop is located in a building that must have once been something like a Dairy Queen. A kind young couple runs the place, where warm welcomes and warm food is the usual setting.
The cinnamon rolls there are not too sweet nor cake-like, but are the right muted slow burn of cinnamon within.

Although I had a very busy day at work, I was able to get home at a reasonable hour. This worked out very well, as our friends Heidi and

kenmora, along with their delightful seven-year-old daughter B., had just pulled in. They live in Westwood, but they've been at a film festival in Austin for several days. Ken writes things for films, and has fascinating things to discuss about trying to get this accomplished or that.

We adjourned to the Shady Oak barbecue restaurant, where my smoked chicken was delightful, and all were well-pleased with their meals. Heidi and I talked a bit of "lawyers we know in common", as she is a rather talented family lawyer in Los Angeles, while I am someone who used to practice a bit of my arcane little areas in Los Angeles for a decade. Law is a grand parade of great stories, so long as one stays away from the client matters and confidences. My experience is that the delightful eccentricity of attorneys renders discussion of any other topic nearly superfluous.

Tomorrow is our State Fair day, barring the unforeseen. We have our battle plan--arise early, get in, get out, get lunch, get on with the next thing. We tend not to invade things to occupy them with private contractors, but instead to blitzkrieg in search of the compassionate kriegspiel of fun. Then we may cruise to the natatorium.

We offered to take young B. tonight to Southfork Ranch--a nearby place where they used to film a television show called "Dallas"--for the haunted house seasonal to October. B. assured us, though, that fear is not on the agenda--but kite flying tomorrow might be.

Our dogs love kids. Beatrice is a bundle of energy. But B. has gone to sleep, where no doubt visions of fried pies and Big Tex will dance in her head.