The Hospice for Ennui 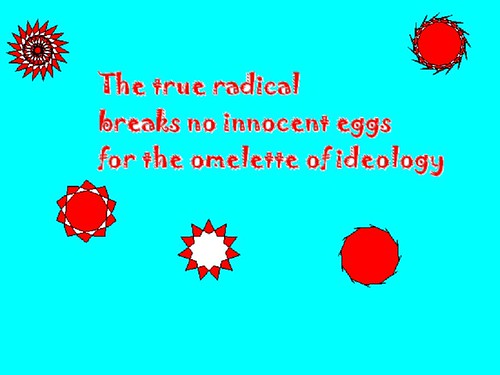 Lately I hear radio spots about people who live in compounds. Compounds tend to be in colorful zones. Green zones represent safety, and therefore are inevitably shelled by mortar fire. Red zones offer buffers between zones, or they offer forbidden pleasures, or they offer opportunities for sports teams to score. When one arrives at the Los Angeles International Airport, then robotic voices proclaim which forms of airport shuttle are "under the red zone" and "under the green zone".

I like that word "compound", which has a vague association for me of mixing paints and arcane substances. I like to imagine that I comprehend compound sentences but think in simple sentences. Yet I have been deposed before, and have read in my own testimony how I express what I think. I am sad and yet relieved to report that the subordinating clause is alive and well in my style of speaking.

I think about how we all live in compounds, of one sort or another. We live in physical enclaves--such as my own tract home suburb. The fabric of this society tends toward the safe, the easy, and the commonplace.

People who live in relative luxury experience compound emotions. One might imagine that comfort and ease would free one up for contemplation. Yet despair prowls all the streets named after real estate developers' daughters and all the communities named after pristine places or happy times. In our "neck of the woods", teens combat boredom in some cases by utilizing a lethal form of heroin known as cheese. We read of the deaths of the unlucky children, killed by paradise.

I think it's a puzzle. We should all see safety, enhanced comfort, and stability as revolutionary virtues. I am convinced that if people focused on the horrors of refugee camps, collateral damage, ethnic cleansing and even the devastation of agricultural failure, then people might feel a point to spreading more comfort to more people.

I don't have some vast point, or easy nostrum. But I have a glimmering of a notion that a life free from want and violence is a rare gift, and that a sense of world-weariness from having a sedate and workable personal life is a luxury as frivolous as almost any imaginable. Rather than victims of comfort, we should be apostles of comfort for all. It's a thing worth trying to spread, this freedom from crime, and this opportunity to relax and think. I suppose I trust people who try to create communities that work more than I trust people with "big" ideas. Imagine if we'd spent 1/100th of our current war budget on libraries and micro-lending programs.

I do like the idea that to those who are given much, more is expected.