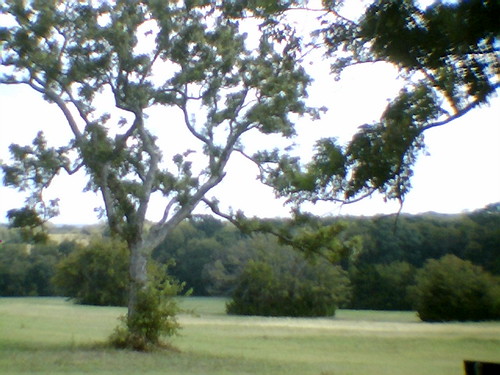 This afternoon after lunch I drove the fifteen minutes up to Erwin Park in nearby McKinney. Erwin Park is a large city park whose primary function is single-track mountain bike trails. I did not bring my bicycle, though, as I wanted to walk along alone.

This park has lots of wide open spaces in which are interspersed the "scraggle woods" which make my part of Texas my part of Texas.
I sat on a park bench under an isolated tree reading a science fiction book for a short while. Then I began to walk and snap pictures, using a very primitive Mikona digital camera which takes 25 pictures on a simple flash drive, and has no little screen to allow one to see what one is taking. As with throwaway cameras, I like the challenges imposed by cameras without focus, high resolution or a "macro" setting.

We get nice breeze here almost year-round, which appeals to the kite fancier in me. When the breeze kicked up a bit, I got out a 2 dollar and 99 cent kite I had in my car, as well as 500 feet of kite string. The kite had a picture of a single space alien on it, holding up its hand in a gesture I take to be friendship.

The kite uncoiled from my hand, and soon stood in a brisk wind several hundred feet from me. I kept a close eye on dark clouds on the horizon, to ensure that no lightning rendered me an unintended Benjamin Franklin. After several minutes, I reeled the kite back in, having experienced what I so often experience with kites here--a simple moment of unalloyed fun and ease.

Then I began to walk once more. I nodded hello to cyclists who passed on single-track trails through the fields on which I strolled.
I stopped and took pictures at a Bois d'Arc tree, whose huge fruits,called Osage oranges, festooned branch and ground. Osage oranges are the size of small bowling balls, and are much prized by squirrels. I believe that the Caddo native Americans ate them, too, but I have never tried them, as they are not citrus but a different thing altogether.

When I finished hiking, I found that I was hungry for a snack. I do not snack often in a big way, but this time I headed to a Chicken Express, a fried chicken restaurant. There I ordered two chicken breasts, and then began the laborious but amusing task of removing all the skin so as to render them healthy enough to eat. There is a sense of delectable poison when all that golden brown chicken skin lies heaped upon the plate. I resisted the templation to eat the crispy temptations, and ate the skinless chicken, which was quite good. Skinless fried chicken is surprisingly do-able in the program I follow, and yet so very tasty.

After I left Erwin Park, I drove past a couple of longhorn cattle on my way to nearby Myers Park and Convention Center. This county park
has a livestock barn formerly used for 4-H shows. Today it featured a springer spaniel trial.

I made it in time to see the very last competitor do its thing. I am not sure that he was, in fact, a springer spaniel, but I do not stand upon pedigree. His owner led him through a course of hurdles, obstacles, climbing benches, and a standing table. None of it was hazardous, but it all required discipline. The dog was wonderful. He reminded me of a high school junior who has memorized 93 percent of his lines for a class play. It's true that the stage manager with the leash in hand had to remind him of a line or two, but his performance was nonetheless more fun than a more Tony one might be.

I noticed that many of the spectators were not, strictly speaking, springers. I was in some doubt about the sheltie-looking animals, as I cast my memory to remember if a springer looked like a sheltie or rather like a hound. But I am positive that the two pomeranians,
the standard poodle, and the miniature pinschers were posting off-topic, as it were. No human spoke to me, nor I to any human, which I suppose would be sad if I did not consider it a good thing.

I stopped by Half-Priced Books on my way home, to pick up cut-rate-priced tourist books. We wish to take a trip in January-ish, and are trying to decide upon a destination. For twenty-two dollars, I got books on Bermuda, Costa Rica, Puerto Rica, and the Dominican Republic, as well as a book on Colorado for our next Summer vacation and a book on offbeat Texas for any stray Saturday.

My wife and I then adjourned to MiMi's chain restaurant, where we ate a bit and read up on places to see and things to do. We could enjoy a visit to many of these places, but perhaps this is the Costa Rica year--a nice hotel or lodge near a forest filled with birds and butterflies sounds right to us. So many other things sounded so good, though, that the jury remains out.

I needed a "recharge" day like today, in a placid isolated city park. I may need a "recharge" day every day, now that I think about it. A few years ago, I went to this park in December,when snow and frozen ground was the norm, and I had the place to myself. Today there were more people, but the vibe was similar--live free, in nature, and just breathe the stress relief.