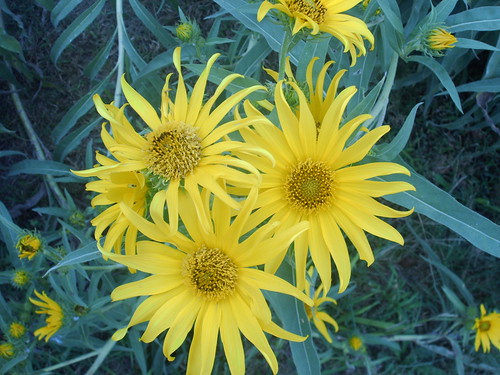 Today I headed to Trinity Trail and hiked from Brockdale Park to the Hiker's Point, a round trip which lasted about an hour. A lot of riders had their horses on the trail today. It's a bit of an art to hike around horses. One gets off the trail as they approach, and then one talks to the rider as they pass. If one does not follow this protocol, an imperfectly trained oater can get a bit skittish, creating a bit of sensation.

The grasses along the trails were filled with abundant flowers and tall weeds. The scraggle woodlands which punctuate the trails were not as rich and lush as in the earlier Summer, as the first precursors of Autumn have begun thinning out the leaves of the understory plants a bit.

When I finished my hike, I intended to dirve to the Allen Library. I missed a turn, though,and found myself by the Heard Natural Science Center .I took a quick walk on the Hoot Owl Trail there,and then snapped pictures among the blooms in the West Texas native plants garden. I have never seen west Texas flowers look nearly as rich and full as the flowers in the West Texas section of the Heard, but I perhaps merely lack the experience of western Texas.
I enjoyed watching the swallows and the bumblebees.