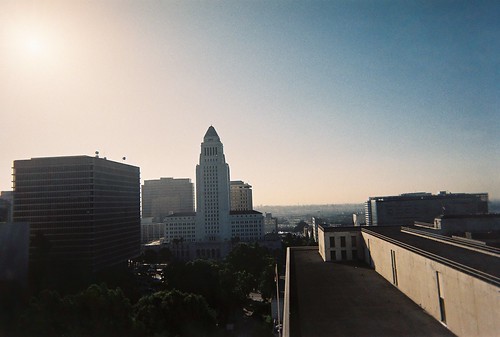 LA federal courthouse in a sea of buildings, originally uploaded by gurdonark.

Today during my commute I realized that this year marked the 30th year since I graduated from high school. I don't know if either of my two high schools held reunions this year, which suggests that I am every bit as popular now as I was in high school.

I have weblog friends just under, at, or just over age 30. I usually "don't pay that no never mind", as the differences in ages don't lend themselves too easily to any but the most general colloquial phrases. Yet when I think of getting my diploma when a quite mature soul or two was years from conception does put a fun spin on things.

We're all rehearsing in this life. I was early for my hearing on Thursday in Los Angeles, so I headed upstairs to the cafeteria atop the Superior Courts building. The cafeteria is surrounded by glass windows and doors. Outside one door, an earnest family lawyer strolled the rooftop, trial notebook in hand, apparently practicing his devastating closing argument. I hope he won his point, because I admire people who practice and work and try.

Today I had to leave for work when a fine movie was playing on Turner Classic Movies. These two brothers had their differences, but somehow united with Mr. Cunard to promote steam shipping. I like movies in which people make progress and do things like alger heroes, all strongly and steadily.

I like, too, when people reach out and be human, and just tell me who they are, and what is happening in their lives. It's such a very human world, this one.