This week I keep trying to get over being a goodish bit under the weather. Every day I feel better. But I continue to feel adverse effects after nearly a week of being a bit ill.

Thursday evening I walked in A.R. Schell Park. There I saw my first Yellow-Crowned Night Heron of the year.  Friday evening I walked on the Chisholm Trail in Plano near Custer Road.  I saw a male and a female Painted Bunting. They were lovely. My wife had already gotten a salad at Market Street, so I stopped and ateechicken breasts at chicken express, with green beans and a roll.  I got a good night's sleep.

This morning when I awoke, I almost went on a long walk on the Watters Branch trail near our home.  But I took a look at little Beatrice and decided to take her on a walk instead. She dawdled and enjoyed her walk. Rather than going to our nearby park, she turned down neighborhood sidewalks. Two nice people in one front yard paused from examining tree lichens to pet her. She appreciated that. When the corgi mix walked by, Beatrice ignored him, and then feigned to look as if she had wanted to meet him. She operates by her own code that does not anthropomorphize correctly.

I went to the municipal buildings to vote in the city-wide election. I had researched my candidates. Most of the candidates were not bad, and a few were quite interesting. I thought how local politics often sprinkles in lots of good folks, while state-wide and national politics tends to attract a less-lovable crop of folks.  My local-is-better theory probably springs a leak, though, because I find homeowner association boards my least favorite form of government.

I got some fish at the other Chicken Express in our area. Then  I walked in Allen Station Park. I listened to the Geddie-Dunn podcast. Bill Geddie, one of those hosts, is my cousin. I like their podcast, though both of them are more right-center than I am. I tend to be left-center.
I saw some lovely birds.  I thought I was almost done walking,when I came upon a female Painted Bunting in the small woods near the historic bridge. As I watched, I saw a Yellow Warbler.  I took lots of pictures of it as it flitted around. 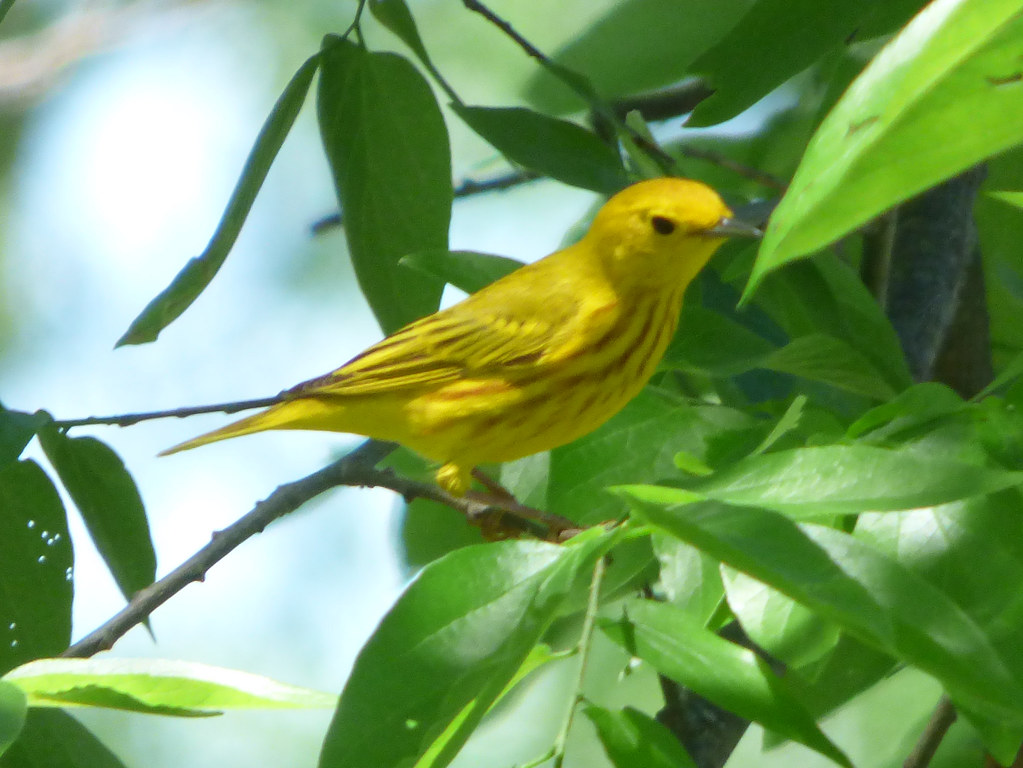 My wife arrived home. She had been working this morning at a church garden in Farmers' Branch which grows peppers for food banks.
She learned a lot about growing peppers. She will sign up again, as she liked the leader very much.

We went to Holy Frijoles for dinner. My wife had tostadas. I had the usual wonderful chicken enchiladas verde.

Now I am watching an episode of Vera and sitting in my easy chair.