Friday morning I waited at a clinic in Plano while my wife had one of those routine medical things. I was able to get some work done. I took a call in her car, which worked fine. I like the way bluetooth allows a better experience than a speaker phone in some ways.

After she was done (with everything fine), I drove us to Piada in Plano, a chain place boasting of Italian street food. We each had something called a Mediterranean Power Bowl. It was pretty good.  I asked the restaurant for the nutrition information sheet. I wanted to calculate the Weight Watchers points. The sheet this time was not a handout but a huge laminated thing. I traced the right item and found that it was 22 "smart points". I usually lunch on 10 or 15.

I got a fair bit of work done at my office in the afternoon. After work, I stopped by Crowley Park in Richardson. The walk was heavenly--the weather was perfect. I listened to the "Ask Noah" podcast, one of my favorites.

We went to dinner at Panera Bread, where I had a turkey chili, a fruit cup and a bit of sourdough bread.

I did not sleep all that well.  So I slept in a bit, which is unusual for me. I did not get on the road until 10 a.m. I  decided to drive to Carrollton, about 20 minutes away. I wanted to walk on the Blue Trail. I like that Carrollton names all its trails after colors. This appears simpler to me than Confederate war heroes or city officials.

When I first arrived at the trail, I realized that I had left my SD card behind. I need to remember to station an extra one in my car. I went to a Big Lots to get a new one. They lacked one, but the nice woman at the register directed me to a Wal-Greens. I did buy some orange-flavored "Ice" brand water from the Big Lots. I found an SD card on sale (i.e., only twice what i would pay at MicroCenter for a store brand card). I started hiking at around 10:52 a.m.

The Blue Trail is four point one miles of sidewalk which runs beside a tiny creek named Furneaux. It's a good place to see aquatic birds, shore birds, bluebirds and other birds that like to hunt from trees in open spaces.  I put on some music from the Bandcamp app on my cell phone to hear as  I walked. I listened to Susan Matthews' electronic music, C. Reider's early electronic explorations (Abandon Hope) and Moira Waugh's jazz/pop/electronica traditional songs. The creek turns into a small lake at one point, upon which dozens of American Coots and Mallards swam.

I saw 17 species of birds. My favorite was a Red-Shouldered Hawk who landed on a nearby tree with a sense of purpose. 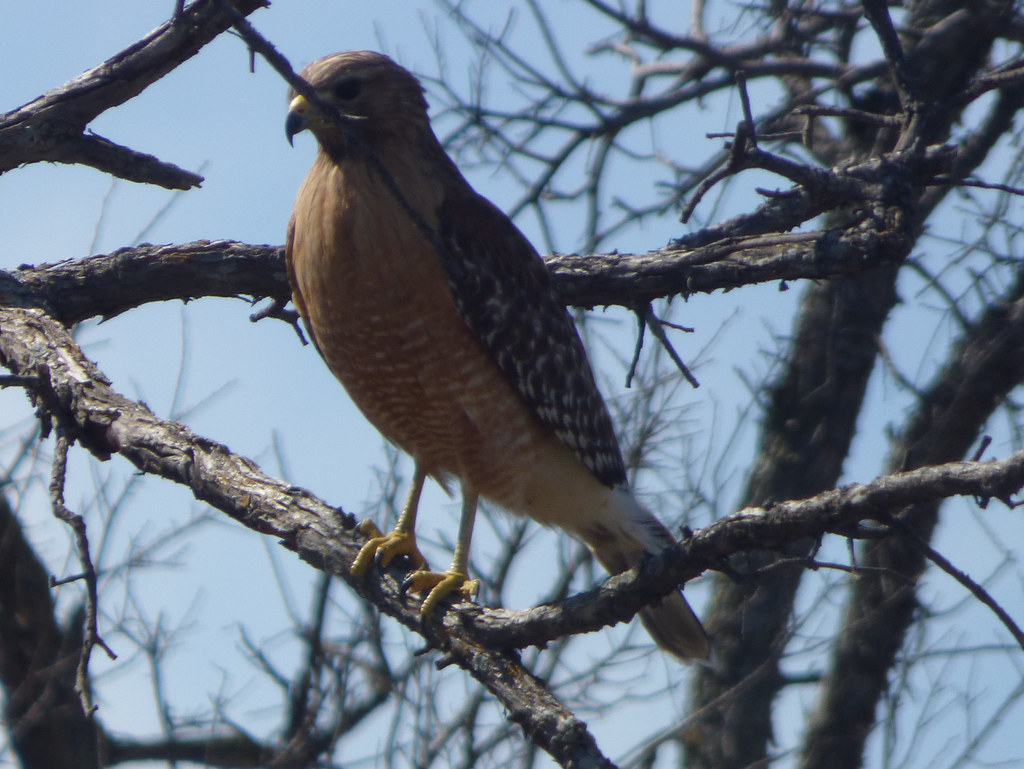 I went home and picked up my wife in the early afternoon.  We went to Jason's Deli for lunch. The service was pretty good on a crowded day.
My turkey wrap and chicken noodle soup were a bit bland, though. I will order things with more spice next time.

We drove to the local Verizon store. My wife had replaced her cell phone, and we needed to pick up the new one. Like me, she opted for the Samsung J7 S. I have really enjoyed this phone at the lower part of the "middle range" of smart phones. She had a lot of images on her phone, so the transfer to the new phone was time-consuming. A fellow named Christian did a good job of helping us. We also modified our phone data plan. I had had a grandfathered plan that guaranteed me near-perpetual unlimited service, albeit at a material price. But
my usage did not require this level of service anymore, especially given the newer near-unlimited plans at lower prices. My wife, meanwhile had a plan that was not very favorable. We switched to something that will save us substantially yet give us all the data we need.

I took Beatrice for a walk. She enjoyed it, though she was a bit slower than usual. She's continuing to age, but still quite game to get outdoors.

We dined tonight at the sushi and hibachi place in Allen called NoSoo. I had a great chicken and shrimp hibachi plate. My wife had a tasty hibachi tuna. We enjoyed our meals.

I am so glad good weather returned. In the parking lot of the restaurant, Bradford pears bloomed.