Saturday morning, the rain fell. My wife and I were tired, having stayed up a few nights watching the Winter Olympic competition in South Korea. The rain fell until a bit after Noon. Then I went to Limestone Quarry Park to take a walk.

Only part of the path was blocked by water. The rest of the sidewalk trail was in good order. The trail at the park is called the Taychas Trail. Rowlett Creek runs through the park. This creek is usually a sleepy little creek. But yesterday it could practically be a rushing Colorado stream. It was a still a bit chilly, but the birds were out in droves.  I listened to a podcast as  I walked, but the podcast proved disappointing. They were reviewing a Linux distribution called Fedora, but as one reviewer noted, he only liked Arch Linux and he never used the Gnome desktop, which the main spin of Fedora used. Sadly, their review shed little more light on the matter than that. I like Linux podcasts, but I must admit that this one was a bit content-free for me.

After my walk, I went to Chicken Express for fried catfish and green beans. I checked my Twitter account. I had left a "like" on someone's tweet that I had passed when I was reading about something else.  The tweet had talked of overcoming disadvantages and gaining admission to a Master of Fine Arts program. A tweet in reply, directed to me and to another Twitter user, advised that the Twitter user did not like to receive 'likes" from people she did not personally know in response to her personal tweets. The tweet was not too personal; I had not even remembered it. Yet I can understand that Twitter user's viewpoint. So I simply blocked her, to avoid having her tweets show up on my stream by accident in the future.

It's funny how different social media works. I participate in the social media platform Weight Watchers Connect. This platform is for support, and lots of it. It serves the same function as Disneyland serves for happiness. It is  one of the most supportive places on Earth.  At Connect, any post similar to the MFA tweet would be greeted with cascades of "likes" from people who had never previously heard of the poster. This is why a few writers have already noted that it is perhaps the social media that all social media should emulate. But I like Twitter anyway, even if a simple "like" to a fairly non-personal tweet can seem like an intrusion. It's understandable--the Twitter user's reply. It's just a matter of context and perspective.

Nonetheless, I found myself a bit down, including a bit down over the matter.  The issue was not the tweet per se.  I felt that Saturday afternoon arrived, and I had not gotten anything done.

I resolved to get something done. I decided to tidy up my car. I went to work on doing so. The weather got warmer as I worked. In a few hours, I had made great progress on the car. Some of the disarray in my car went to reycyling. Some was neatly put away. Some things were thrown away. I was so pleased to have made such great progress.

Saturday evening we went to Thai Noodle Wave in McKinney for dinner.  I had a beef pho. I enjoyed it.

I went to Weight Watchers. I am good at keeping my weight level. Today the scale showed that my weight is once more 100 pounds down from its level when I first began Weight Watchers in 2005. It has been steady at roughly my current weight, give or take 5 pounds, for a couple of years.

After Weight Watchers, I walked in Hoblitzelle Park in Plano. I was thrilled to see a Ruby-Crowned Kinglet. 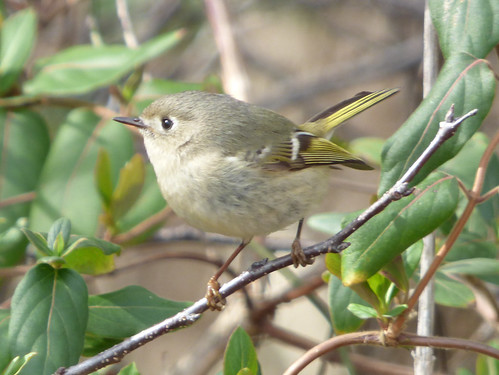 This bird from Canada winters in north Texas. It's not rare. But it's rare to get a good picture of this bird. They usually hop from branch to branch so swiftly that they are impossible to photograph. They have little or no fear of people. But they have a great caution about raptors, and hence the hopping. I first was able to identify one during a trip to the Whiteshell in Manitoba in June of 2006. I read about how the Ruby-Crowned Kinglet was so friendly it would come right up to one. So it proved. In Summer plumage, the ruby crown is very prominent. In Winter plumage, it only comes out from time to time.

I enjoyed the sermon at church, which dealt with not being a gossip. I admit that my mind wandered, though, during the pastoral prayer. I enjoyed singing.

After church, I went once more to Chicken Express, though this time I visited the one in Allen and not the one in McKinney. I had a chicken breast, green beans, 1/4 of a roll, and french fries.

After lunch, I walked in Allen Station Park and listened to the "Ask Noah" podcast. This is a really good podcast. I enjoyed it very much. I heard a Northern Cardinal's song nearby. I looked high on a tree to find it. But the cardinal proved to be very low on a tree near me.

I headed home and listened to an album of ambient classical music for which I had agreed to write liner notes. I enjoyed the album. I was glad to get a start on some further liner notes I need to write.

I spent the late afternoon tidying my papers in my office upstairs and organizing them. I made great progress on this task. I found a missing document that was just where it should have been, and hence previously proved nearly un-find-able. I was delighted to find it, even if i should have found it before. Such are the wages of being less organized.

In the late afternoon, I decided to take a short bicycle ride. I went to Green Park. There I watched House Finches atop small pine trees in the burst of bright light from the setting sun. I bicycled home just before dark.

We dined tonight on turkey sandwiches and settled in to watch the second season finale of "Victoria" on PBS.

from Dreamwidth, because two posts of the same text are twice as nice
Collapse