I woke up early this morning and breakfasted on Kashi Warm Cinnamon cereal and skim milk.

I decided to go to the 8 a.m. bird walk at the Heard Natural Science Center. this monthly walk is guided by three likable fellows from the local Prairie and Timbers Audubon Society. When I arrived, I saw a large group of folks gathered to go on the walk. I wondered it the crowd would make the walk less fun. But the walk turned out to be grand. My bird list reached 25 species (the guides got 35 or so, but they follow the normal convention of adding to the count things they only heard, but I prefer only to list things I see. This caused me to leave off Tufted Titmouse, Carolina Wren, and White-Eyed Vireo, for example, as one can easily hear them on a Spring day but I did not see any). 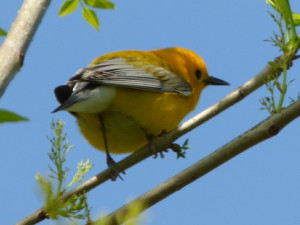 As is fitting, he was among the wetlands portion of the reserve.

After the Heard walk, I went to Chicken Express for fried fish and green beans. Then I went to Bethany Lakes Park. I noticed on my Facebook memories page that every year about this time I saw Northern Rough-Winged Swallows who migrated through on their way to wetlands climates to the north.

In the event, I did not see this particular swallow troupe. Their tree was not as advantageously placed as in prior years in relation to the little pond that drew them. I thought I saw one or two, but I could not confirm. Perhaps later this Spring I will see them. I did like the 20 species I did see, including a first of the year Green Heron.

In the afternoon, I stopped by the store for bananas and treats for Beatrice. I came home and watched on-line the chess games in the 10th round of the United States Chess Championship. The two front-runners, Sabina Foisor and Nazi Paikidze-Barnes, narrowly escaped losing positions, coming away with wins. I also was intrigued when Carissa Yip, age 13, fought tenaciously back from a lost position, got roughly even, and then failed to find the way to draw. She is so skilled at her age that her potential to be a grandmaster appears to me to be high. She also plays fearless, fighting chess, which is fun to see.

I threw Beatrice's duckling toy and ate too many bananas. Then I fell asleep for a few hours, which I hate to do on a Saturday. I woke up near 8 p.m. My wife grilled some chicken with some tandoori-like flavoring, which we ate with potatoes and vegetables. We settled in to watch an episode of "Ashes to Ashes".

On my computer, I looked at bed and breakfast websites. Every time I go to an American bed and breakfast, I always meet at breakfast time an over-earnest young couple who are reasonably good conversationalists. At some point, one of them always beams a bit and says "we're pleased to meet real bed and breakfast people, which is ironic, because if I am anything, I am not "real bed and breakfast-y". I dislike losing early morning hiking time to late-served meals with too many calories and too much fat. But I do like the idea of small businesses like bed and Breakfasts in small towns.
Collapse