The rain moved in today. We experienced it as heavy but not damaging or threatening.
I walked on Sunday morning in mild rain on the Chisholm Trail. I liked the Great Blue Heron. 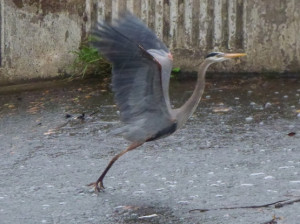 I was impressed that both Weight Watchers and church were well-attended notwithstanding the weather. I gained eight tenths of a pound. The sermon dealt with fallacy in the phrase "God said it. I believe it. That settles it", using effectively various of the passages from the Book of Deuteronomy to make a point against the facile pitfalls of literalism.

I went to Casa Taco for lunch. The rain poured as I approached the door. The door was closed. It turned out that it has malfunctioned in the storm. The manager let me and the other set of waiting patrons in.

I liked how the young mother handled things. One of the several kids she and her husband brought to lunch was worried because the door was kept open, making the cafe modestly cooler. The young mother pointed out that "we're safe, we're a bit wet, but we're okay", and the table full of kids calmed instantly.

After my three soft beef tacos were eaten, I drove to Celebration Park. I stayed in my car and watched birds. Then I drove home.

When the rain stopped, I took Beatrice on a walk. I saw a young coyote cross our street and go into an alley up the street from us. This is unusual in mid-afternoon, as we usually see them at dawn or after dusk. But it's mating season and coyotes get out a bit more now.

Late in the afternoon I went to Kroger for bananas, oatmeal and sports drink.
I walked a bit in Green Park. Then we ate chicken sliders on wheat rolls for dinner. We enjoyed seeing the first episode of a new season of "Call the Midwife".
I was pleased to see Harriet Walter join the cast--she has been a favorite of mine since she did the best on-screen Harriet Vane in the late 1980s. Now I am watching a rerun of "Blue Bloods" and thinking of the coming week.
Collapse