Overhead at Timbers Nature Preserve in Murphy, a Red-Tailed Hawk flew. An American Crow began to "mob" it, if a one-bird mob is a mob. 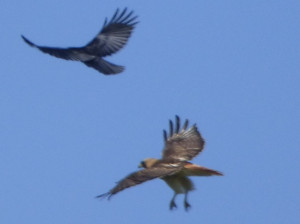 We walked Beatrice tonight in the park, which was like administering joy.

I ate organic corn flakes and skim milk for breakfast, three soft chicken tacos for lunch, and black bean soup, chicken sliders and a a beef patty for dinner.
Collapse