Sunday I walked at J.M. Caldwell Park in Princeton, the nice open-field park on the site of a 1945 World War Two prisoner-of-war camp. Almost nothing of the camp remains. I saw some nice sparrows.

Sunday morning the "executive minister" (the modern term for what we used to call the "associate", or second, minister) at our church explained how when he called the bishop to semi-retire, after an unusual 15 years at our church, the bishop countered his idea of semi-retirement with a new idea of making him the main pastor at the little church one town over. Methodist ministers traditionally get moved around a lot. This minister has instead had a career whose longest stretch is in one town. I thought about a preacher's daughter I knew, slightly, in high school. I wondered where she ended up,as her family moved away when he was re-assigned.

I listened to an episode of the Linux Action Show in which they advised that they are breaking the show up into several shows. We watched a PBS dramatization about the Bronte sisters--it's amazing that 3 (or more, depending on how one counts) classic novels came from one set of sisters writing in relative isolation. We turned on the closed captioning when the soft tones and Yorkshire accents proved a bit difficult for my wife to understand.

I had oatmeal for breakfast, soft tacos for lunch, and a chicken breast, a chicken thigh and pinto beans (all leftovers from El Pollo Loco) for dinner.

I walked in Heritage Park at lunch, where Texas bluebonnets bloomed. 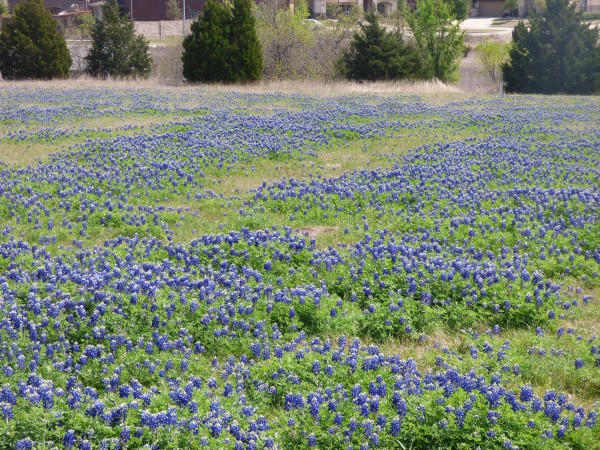 This evening I walked Beatrice, watched Supergirl on television, and built the various family business spreadsheets I build each year.