I took a long morning walk at Towne Lake Park in McKinney, including the Community Trail and the Wilson Creek Trail. I saw teams of cricket players, Tiger Swallowtail butterflies, hints of wildflowers, happy dogs, squirrels in trees, 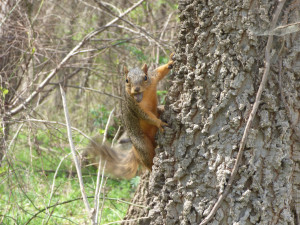 men playing disc golf (I think one scored something akin to a hole-in-one), men and women on bicycles, men and women walking and jogging, a man hunting for birds (more carefully than I was, I suspect), a family having a picnic, a sign that said "No Fishing from Boats" (a welcome boost to people on shore), men using smart phones, and some several hundreds of birds among 26 species.

I will have to look up a butterfly species name or two, as I have to refresh my memory reach Spring.

I ate lunch at Cici's pizza so that I could have only two pieces so that I could eat more at dinner. My breakfast had been a kashi cacao cereal and skim milk.
I went to the grocery store to buy bananas, dog mini-bones, Powerade Zero sports drink and dog treats. I have doctor's orders to drink diet sport drinks to keep my sodium up so that I avoid orthostatic hypotension, the fancy name for that thing where one falls over from standing up. I walked a little in Green Park, where I watched three Chipping Sparrows hopping in the grass.

The weather from overcast and pleasant to clear and warm to overcast with a chill wind, all in one day.

We went to Spazo for dinner, where I had a meatball sandwich and a salad. Then we went to the film "La La Land", which we liked very much. I have seen 3 of the Oscar nominated films so far, and each is so different from the others that the Oscar competition was like comparing kumquats, durian and mushmelons. I hope to see the other nominees in the coming year. I did enjoy that old La thing of seeing how many places in La La Land I knew from having lived there. One key scene was an exit I took routinely to my office.

I have a hankering to make a recording of manipulated sounds converted into songs via the software Audacity.
Collapse